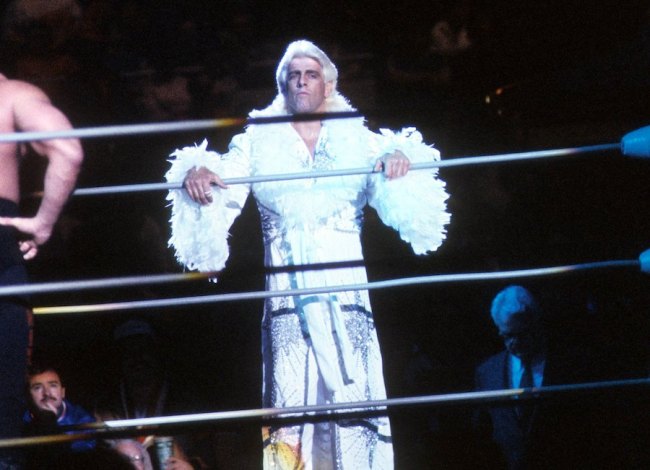 Between a plane crash, numerous health scares, going broke, and years of wrestling taking a toll, Ric Flair will openly admit he’s lucky to be alive.

Author Keith Elliot Greenberg was the latest guest on the “Not About Wrestling” podcast and discussed how close Flair came to possibly losing his life in the ring, not because of a move gone wrong, but because of an angry mob watching Flair get the best of their hero.

Greenberg, the author of the new book “Too Sweet – Inside The Indie Wrestling Revolution” was the co-author of Flair’s 2004 autobiography, “Ric Flair: To Be The Man.”

Greenberg is quick to explain that Flair is a tougher guy than people realize, especially in a sport overrun with legitimately rough men.

“This is post-2001, so WWE now owns the assets of WCW. The NWA exists but in a regional form, so it’s no threat to the WWE at this time.

So I was able to tell that story of being the real 60-minute man, who had to perform in town after town after town, sometimes twice in the same day, and make the local babyface look like a superstar but still retain the championship and always be ready to protect himself in case someone wanted to double-cross him.

That’s another piece of wrestling history, being the touring NWA champion in a time when not the most savory of characters populated the wrestling business.”

Harley Race, one of the toughest men ever to step foot in a wrestling ring and former NWA champion himself, assured Greenberg in an interview for the biography that Flair could handle himself in such a situation.

“Harley Race assured me that Ric was a pretty tough guy and could handle himself. Even though Ric pretended to be a dandy, Ric was a great athlete and as tough as anyone.”

Greenberg did share one story where Flair’s toughest wouldn’t have mattered because he might have been fighting off an angry mob and not just one disgruntled in-ring performer.

Luckily, Flair’s quick thinking kept an enraged crowd from storming the ring to get their hands on “The Nature Boy” during a match in 1982.

And one time in the Dominican Republic, the crowd was not only getting hostile, but the soldiers surrounding the ring were starting to act menacing. And they were armed with automatic weapons.

And that’s when Ric Flair grabbed Jack Veneno and put him on top of him and said ‘you’re pinning me.’”

This change of plan likely saved Flair’s life but created an issue in the storyline. The outcome made it appear as though Veneno had won the NWA title.

The storyline changed after the match that Veneno had to give the belt back to Flair because he couldn’t defend it outside the Dominican Republic.

Greenberg is grateful for being able to contribute to bringing the history of Ric Flair to fans but admits that one of his regrets is no remaining in close contact with the Nature Boy after the project was completed.

“One of the early problems between us was that Ric did not request me to be his author. Simon & Schuster and WWE requested that I be his author.

There were some challenging interactions between us. At the end of the project, we spoke very kindly to one another. I wish I’d been able to stay friend with him, like everyone else I’ve co-authored a book with.

I would have been gratified to say some comforting words to him after his son Reid died because I heard him on the phone speaking to Reid. He was a very loving father.

I think I even learned some lessons about parenting, believe it not, from the loving way Ric spoke to his children.”

Greenberg wants to express that sentiment to Ric in person and remains hopeful he will get the chance someday.

Click below to listen to the entire interview with Keith Elliot Greenberg about his time with Freddie Blassie, Ric Flair, “Superstar” Billy Graham, and more.