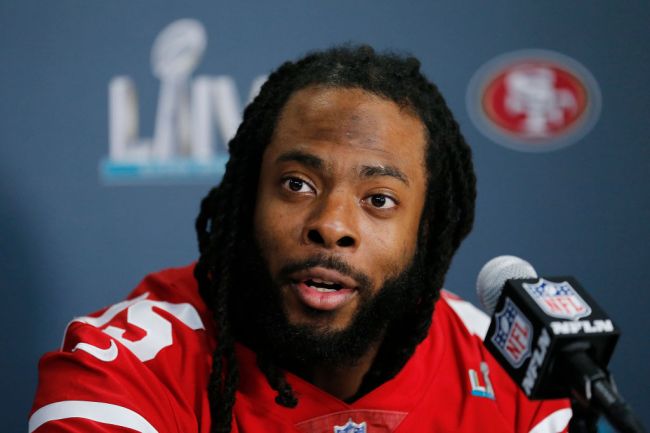 We’re beginning to learn more about the Richard Sherman situation.

Early Wednesday morning Sherman was booked at the Seattle Correctional Facility for “Burglary Domestic Violence,” “resisting arresting” and has been denied bail.

Free-agent cornerback Richard Sherman is facing several charges, including one for burglary domestic violence, after he was arrested at his wife’s parents’ residence in Redmond, Washington early Wednesday.

Sherman suffered minor lacerations to his lower leg and ankle and was treated at a local hospital as a result of contact from a police dog, which was used in his apprehension, Lowe said. An officer at the scene also received minor injuries, he said.

Apparently, Sherman was involved in a DUI hit-and-run at a construction site before trying to force himself into his in-laws’ house.

After running plates on an abandoned vehicle near the crash site, state police ended up at the same Redmond, Wa. home at which Redmond Police were investigating a complaint and assisted on Sherman's arrest.

The 911 call in the Sherman case has since been released and in the audio Sherman’s wife Ashley Moss could be heard pleading with the dispatcher to get help because he was drunk, threatening to kill himself, was being aggressive with her uncle, and said he was going fight the police if they showed up.

“I need officers to my house now my husband is being drunk and belligerent, he’s threatening to kill himself…He’s being aggressive, he’s wrestling with my uncle, he’s threatening to kill himself, he’s been sending text messages to people saying that he was going to hang himself and he’s saying that if the police show up, to please don’t shoot is what I’m asking. He says that if the police show up that he’ll try to fight them”

Moss would later release statement reassuring the public that she’s alright and that Sherman had a brief lapse in judgement.

Richard Sherman’s wife, Ashley Moss, told The Seattle Times: “He didn’t harm anybody. My kids were not harmed in the incident. He’s a good person and this is not his character. We’re doing all right, just trying to get him out. I want people to know no one was injured.”