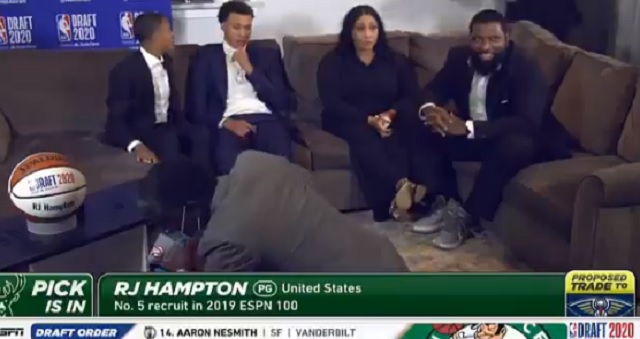 There was a bit of confusion in the RJ Hampton household on draft night.

On Wednesday night Hampton, who slipped deep into the first round after once being projected to be a lottery pick, was initially drafted by the Bucks but was apparently traded to the Denver Nuggets.

With the 24th pick in the 2020 NBA Draft, the Milwaukee Bucks select RJ Hampton!#BucksDraft | @RjHampton14 pic.twitter.com/KvabWoIV1I

At No. 24, the #Bucks "pick" RJ Hampton… for the Pelicans… who send him to the Nuggets. https://t.co/RcUZJfCHaY

Hampton was announced by NBA commissioner Adam Silver as the Bucks’ draft pick and the family couldn’t agree about which hat Hampton should wear which led to an awkward live TV moment.

Why RJ Hampton pops TOSSED that hat like that …?? 🤣🤣🤣 #NBADraft pic.twitter.com/gsS5AHWxFk

A full breakdown of RJ Hampton’s dad DISRESPECTING the Bucks hat. Dude threw it across the room. pic.twitter.com/C066xc3B09

RJ Hampton tryna figure out which hat to put on pic.twitter.com/6iU5B74UIw