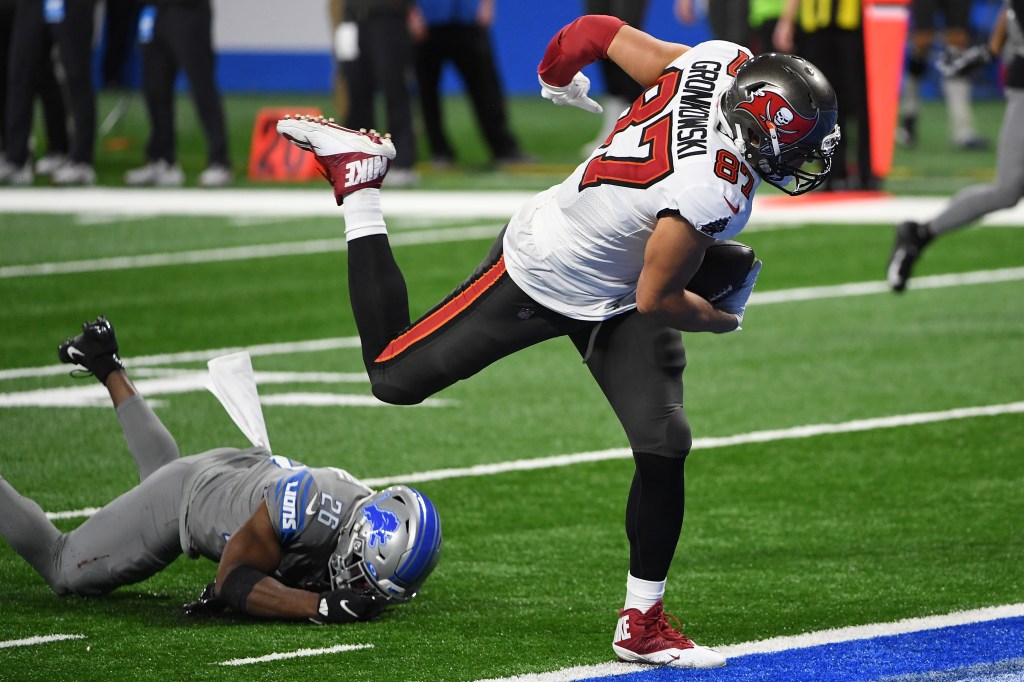 The Tampa Bay Buccaneers are set to play in the 4th NFC Championship Game in franchise history this weekend against the Green Bay Packers. Temperatures are expected to have a ‘feels like’ in the low 20s with an over 33% chance of snow flurries. As someone who lives in the Tampa Bay area, I can tell you the Bucs are not ready for this. It was 75 degrees here yesterday.

Meanwhile, Buccaneers tight end Rob Gronkowski has played in 4 Super Bowls and his team appeared in 8 straight AFC Championship Games from 2011 through 2018. He and Tom Brady have more big-game experience than anyone else in the NFC Championship game this year and it’s not even close. But the Bucs (+155) are the underdogs against Green Bay (-175). Tampa Bay has won a team-record 7 straight road games going into this Sunday at Lambeau Field so they’ve got that some good mojo going for them.

But where does this Tampa Bay Buccaneers offense rank compared to the other squads that Rob Gronkowski has played with, the teams that won 3 Super Bowls and made 8 straight AFC Championship Games? On a Thursday Zoom call, Gronk said that this could be the best offense he’s ever played with which some might take as lip service but when you consider Gronk only has 7 touchdowns this season because Tom has so many offensive weapons to choose from you can see that Rob Gronkowski is just easily telling the truth as he is hyping up his teammates:

“Yeah, I would say it definitely ranks up there if it’s not No. 1,” Gronkowski said in a Zoom call with reporters Thursday.

“I’ve been around a lot of great talented players, but I would say overall as a group just from position-to-position and how many guys we have at each position I would say that this definitely ranks up there if it’s not No. 1 for talent-wise as a whole.” (via Yahoo! Sports)

I’ve said this many times over the past season here on BroBible but as a lifelong Tampa Bay Buccaneers fan none of this seems real. Not even now when we’re playing in the NFC Championship Game this weekend and two wins away from being Super Bowl Champs again. Tom Brady, Gronk, AB, Fournette, McCoy… All of these guys just seemed to fall in our lap when we didn’t do anything as a franchise to deserve them other than convincing Tom Brady to come and play in warm weather.

Do I think the Buccaneers will beat the Green Bay Packers on Sunday afternoon? I can see it happening but we’re the underdogs for a reason. Is this the best offense that Rob Gronkowski has ever played with? It actually might be. Belichick always made talent appear out of thin air but the Bucs offense was STACKED before it made significant upgrades this season.

Side note: I fully expect Gronk to have a 2 TD game on Sunday. He’s due. Teams are forced to look at Mike Evans, Scotty Miller, Godwin, Brown, Ronald Jones, and everyone else. I firmly believe that Gronk is going to get his this weekend.