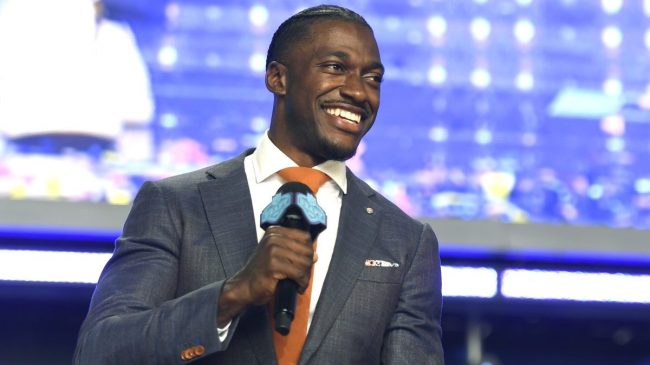 Robert Griffin III is quickly becoming a star in the sports media field. The former Heisman Trophy winner at Baylor now works for ESPN covering both college football and the NFL in a number of capacities.

Griffin has gained a number of fans due to his knowledge of the game mixed with his bold takes while on the air. He may have gained even more on Saturday with his hilarious comments while calling the season-opening game between Michigan and Colorado State.

Griffin was serving as a sideline reporter for ESPN on Saturday as the Michigan Wolverines began their season against the Colorado State Rams.

His first piece of business was to explore the Michigan student section. Griffin quickly learned that tailgating for a season-opener takes quite the toll on the liver.

RG3 reports that the Michigan student section is down bad pic.twitter.com/JakWbztLfn

But that was his best comment of the day. Instead, that came late in the game with result well in hand for the Wolverines.

Michigan led Colorado State 44-7 late in the contest. That gave Jim Harbaugh the opportunity to bring some little-used backups into the game. Those included true freshman quarterback Alex Orji.

Yes, it is pronounced how you think it is.

Orji, a three-star quarterback in the class of 2022, plunged into the end zone to make it 51-7 with under two minutes remaining.

That prompted a line that most college football fans though they would never here.