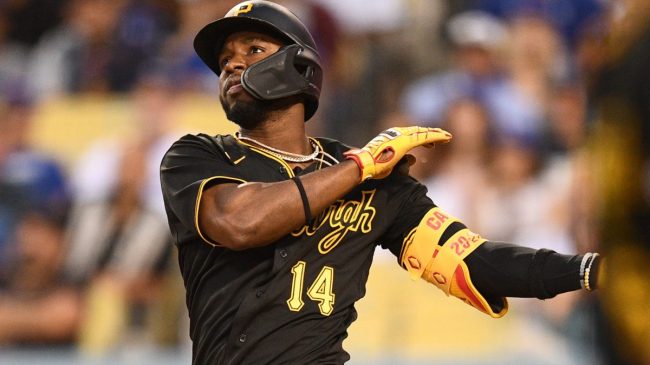 The Pittsburgh Pirates pulled off a convincing win over the NL West leading Los Angeles Dodgers. The 8-4 victory catapulted the Pirates to 22-27 while extending a current hot streak that’s seen the team win five of their last seven games.

A huge key to the victory was a late inning barrage that turned a one-run game into a six-run lead for Pittsburgh heading into the bottom of the final frame. And that late lead was built by a two-run shot from second baseman Rodolfo Castro.

But it’s not exactly how the Pirates drew it up.

Castro was actually sent to the dish to lay down a bunt. It appears he missed a sign on a 3-1 pitch, which he promptly turned around for a 413-foot bomb. Take a look.

Why bunt when you can hit a homer? pic.twitter.com/HXDj2RnMxl

Everyone in the stadium was expecting the bunt to be on, from the announcers to the manager. The moonshot had folks talking on social media.

Lmao. Derek Shelton is 100000% heated that the bunt sign was still on and Castro swung away hitting a nuke instead of bunting. He'd literally rather see a sac bunt than a nuke.

It looked like Castro pulled a card straight from the Kent Murphy school of baseball. Don’t ever bunt, just hit dingers.

The homer gave the Pirates a 5-2 lead, which they’d expand to 8-2 in the top of the ninth inning. The win helped Pittsburgh achieve something they haven’t in over two decades.

Pirates land their first sweep in LA since 2000

With the 8-4 win, the Pirates completed a three-game sweep of the Los Angeles Dodgers. It was the first time that’s happened while playing in LA since the 2000 campaign.

The @Pirates sweep the Dodgers in LA for the first time since 2000! 🏴‍☠️ pic.twitter.com/YkFf7muhgH

The Pirates are now 5-1 against the Dodgers this year. They’ll hope to stay hot in an upcoming series against the Arizona Diamondbacks.