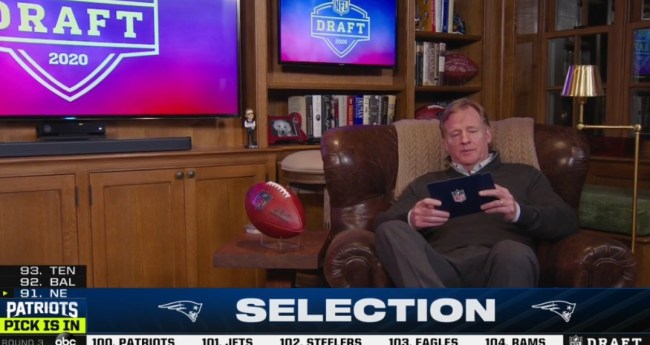 NFL commissioner Roger Goodell has been working long hours during the NFL draft and it looks like he’s running out of steam.

Four hours into round two, Goodell began to stutter heavily while reading talking on air.

Pretty sure Goodell is drunk. pic.twitter.com/4XV0wlzPKR

Later in the night, Goodell appeared ready to pass out on his couch while delivering picks.

The Stages of Roger Goodell, the saga: pic.twitter.com/ZRh6WHaagX

Goodell remembering why he usually dips out after the first round pic.twitter.com/IXHQueduRo

Goodell looks like he wants to start taking shots of Cuervo while making these late night picks #NFLDraft2020 pic.twitter.com/0zs9GJB1no

Goodell just mailing in the rest of the 3rd Round. pic.twitter.com/LvNrwNI1DS

Ever since Goodell has sat down he has suck into that leather chair with each pick. I bet after the last pick tonight he tells alexa to turn the lights off and we see him in same spot tomorrow!