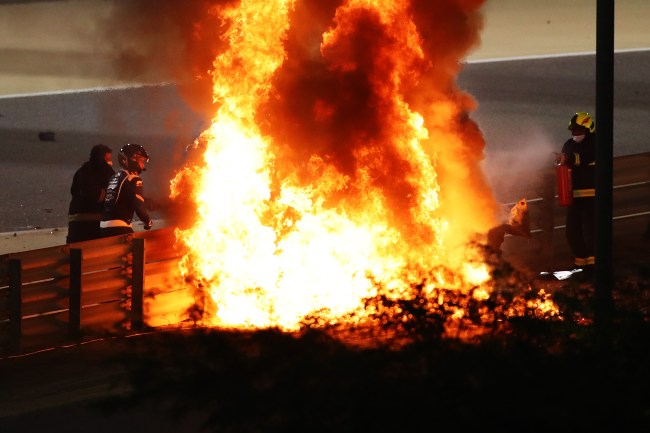 French-Swiss driver Romain Grosjean is lucky to be alive today after a terrifying fiery crash during Formula 1’s 2020 Bahrain Grand Prix. During the first lap of the race, his car split into two and turned into a fireball after smashing into the metal guardrail just after the race started.

First responders called it a ‘miracle’ that he escaped the blazing fire and avoided any major injuries. The rescue crew discussed what it was like pulling up on that scene and seeing one half of the car pointed in one direction and the other half another, and everything engulfed in massive flames. But before we check out those wild quotes from the rescue crew you need to see the footage of the crash.

Be on the lookout at the bottom right of your screen as Romain Grosjean’s car goes off the track and into the wall where it almost instantly explodes into a massive ball of flames. How any driver could be in the middle of this and escape with only minor injuries defies common sense. If someone were to show you just this crash and the flames you’d assume the worst, yet he walked away in one piece.

The way the ‘medical delegate’ tells it, they arrived to find the driver struggling to get out and were able to use a fire extinguisher to get the roaring flames JUST FAR ENOUGH away from him to get him out of the vehicle:

“First lap, as normal we were following [the cars] around. There was just a massive flame and as we arrived, it was a very odd scene, we’d got half the car pointing in the wrong direction and then just across the barrier, a mass of heat.

“Just to stop and then looking to the right, at that point I could see Romain trying to get up. We needed some way of getting to him, and we had the marshal there with an extinguisher, and the extinguisher was just enough to get the flame away. Romain then got high enough for me to reach over and pull him over the barrier.” (via Sky Sports)

FIA Medical Car driver Alan van der Merwe said he’d never seen fire like this before. He told Sky Sports that this was ‘new and unknown territory’ so they had to think on their feet. His instincts are what enabled them to survey Grosjean’s injuries after getting him out of the car and assess his situation:

Asked what the first thing he said to Grosjean after rescuing him, Roberts said: “I told him to sit down.
“Obviously he was very shaky. His visor was completely opaque and in fact, melted. I had to get his helmet off just to check that everything else was OK. He’d got some pain in his foot and his hands.
“From that point we knew it was safe enough to move him around into the car just to give him a bit more protection, get some gel onto his burns and then get him into the ambulance off to the medical centre.” (via Sky Sports)

The initial concern was obviously severe burns, then that concern turned to damage from smoke inhalation, which faded to a worry about a head impact injury. Miraculously, they say none of the flames or smoke went up into his helmet.

Seriously, if you were a friend who texted me this clip of just the crash and fire I would assume that driver sustained critical injuries. The fact that he was able to step out of the car and get to safety with the help of the rescue squad is like my eyes are lying to me based on the evidence I was presented. It’s unreal. He shared this update on his condition:

I genuinely hope he had time to buy a lottery ticket yesterday because the dude had more luck than anyone else on planet earth did on Sunday. You can head on over to Sky Sports to read more about this incident if you’re looking for more.