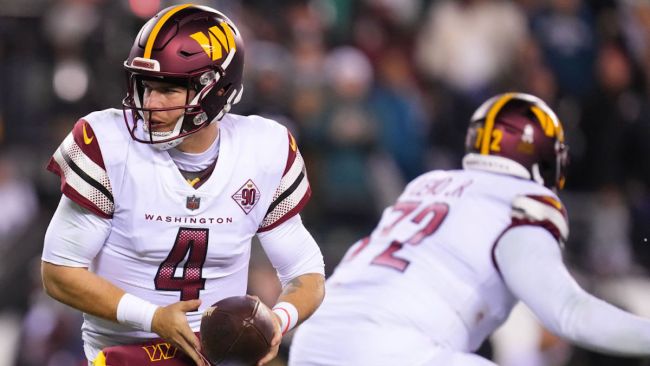 Perhaps more so than the fact that they just beat the NFL’s best team in the Philadelphia Eagles, anyone with remotely functioning eyes and a rudimentary understanding of football will tell you that the Washington Commanders are a better team with Taylor Heinicke as their starting quarterback. Their record obviously indicates as much as the team is now 3-1 in his starts.

In fact, Terry McLaurin — arguably the team’s best offensive player — is basically done pretending that he doesn’t want Heinicke to continue as the team’s starting QB as he went on Scott Van Pelt’s SportsCenter to gush about the 29-year-old signal caller.

“He just gives us a chance to win and the heart he plays with I feel like is infectious. I’m really happy to play with a guy like that who is gritty, you know what I mean? It’s dirty, it’s nasty. You love playing with guys like that because they elevate the guys around them,” McLaurin said after torching the Eagles for eight catches and 128 yards.

And yet, despite this, head coach Ron Rivera is still beating around the bush when it comes to the topic of the team’s permanent starter once former QB1 Carson Wentz returns from injury.

Following their Monday Night Football victory over the previously undefeated Philadelphia Eagles, the Commanders are now in the thick of the NFC Wild Card race at 5-5. As things currently stand, they trail the 5-4 San Francisco 49ers for the seventh and final seed in the NFC playoffs.

Down the stretch, the Commanders have games against the Texans, Falcons, Giants (x2), 49ers — that’ll be a big one given the current playoff pictures —  Browns, and Cowboys.