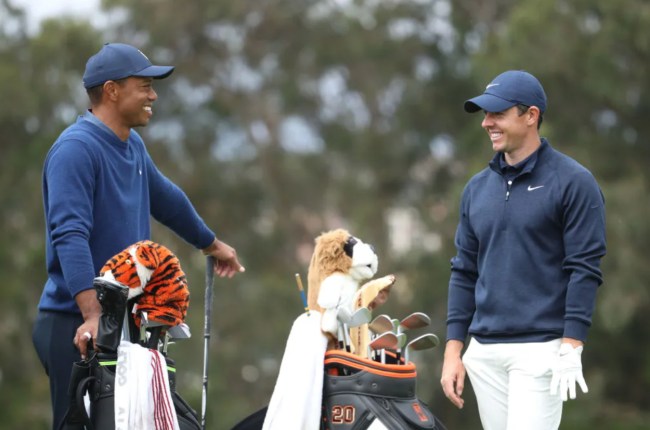 Rory McIlroy, just like every other golf fan on the planet, would love to see Tiger Woods play in the Masters next week.

Woods has not played a competitive round of golf since his car crash in February of 2021, but recent developments show that he’s doing everything in his power to tee it up at Augusta National.

The five-time Masters winner flew to Augusta on Tuesday with his son Charlie and reportedly played 18 holes with Justin Thomas. The Tuesday practice round can be viewed as a test run to see how his body, specifically his right leg, holds up during and after one of the toughest walks in golf.

McIlroy, who is chasing his first green jacket to complete the career Grand Slam, hopes to see Woods make his return to golf next week.

“I think for golf and for the Masters tournament and for everyone, to have Tiger there would be phenomenal,” McIlroy told the media ahead of this week’s Valero Texas Open. “I think it just adds to the event. Obviously, it does.”

“Anything Tiger Woods does in the game of golf is heightened whenever he’s there. I mean, it would be awesome for him to be there. You know, he was there yesterday obviously and he’s trying to see what he can do. Obviously, no one knows but him if he can make it around and think, you know if he believes he can compete.”

Given the many ups and downs Woods has endured and overcome throughout his career he’s looked at by some as some sort of superhero. With that in mind, it’s impossible to write him given how many times he’s pulled off the unthinkable.

Rory Is Surprised By Everything Tiger Does

McIlroy looks at Woods’ accomplishment in a different light, however. He thinks everything Woods does is surprising, but most golf fans and even players aren’t surprised with anything he pulls off anymore.

McIlroy was asked the simple question “does anything Tiger does surprise you anymore,” and he gave a very interesting answer.

“Yeah, everything. I mean, people — I’ve said this so many times, but from basically March of 2017 fast forward two years and he wins the Masters and where he was with his body and what he had to do to get back to being somewhat healthy,” McIlroy explained.

“And it’s not even being somewhat healthy, it’s also what he has to do before the round and after the round just to get himself ready to go and play golf. Yeah, the sheer will and perseverance, yeah, it is incredible. If he comes back from this again, it’s just, he likes to prove people wrong, he likes to prove himself wrong, I think.”

You can always count on McIlroy to keep things in perspective.