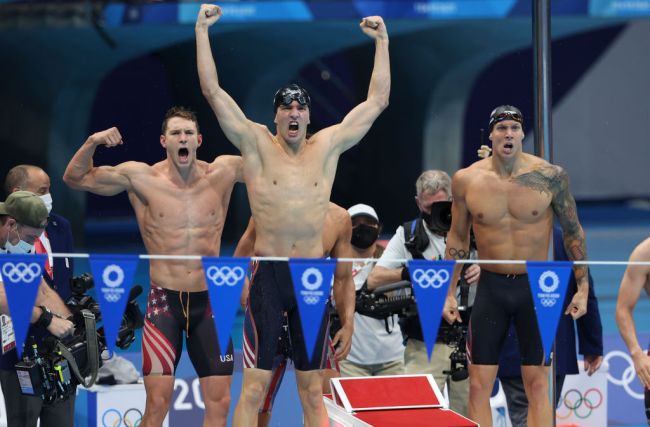 Caeleb Dressel has been the American face of the Olympic Games so far, but Rowdy Gaines isn’t far behind. The 24-year-old American swimmer rounded out his trip to Tokyo with five gold medals, the most by any athlete other than Michael Phelps since 1988.

And yet, it was the man who called his fifth that stole the show.

In a nail-biter 4×100 medley relay on Friday, Team USA swam the fastest time in history to take gold. Perhaps more impressively, the win preserved the United States’ perfect record in the event.

Despite being the underdogs to Great Britain at the 2020 Games, Dressel, Ryan Murphy, Michael Andrew and Zach Apple kept that streak alive with a world record. You can watch the very intense, full race on YouTube.

Here is a good visual breakdown of the event:

While the race itself was exhilarating, watching Rowdy Gaines on the call was even more exciting. The three-time Olympic gold medalist is part of NBC’s booth for the swimming events and does an amazing job.

Not only is he great at breaking down what is going on for those of us at home who might not know swimming well, but he is electric on the mic. Watching him bring home the United States men in the 4×100 medley is a rollercoaster of emotion.

The Rowdy Cam is officially an institution and should be a thing for every Olympics henceforth. Perhaps we could even get an alternate broadcast?