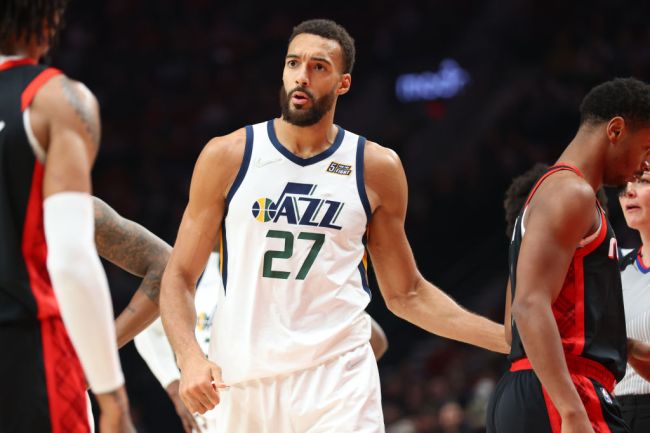 More than the fans of seemingly any other sport, basketball fans love to compare current players to players from past eras. Today we found out what happens when two players engage in that debate with each other.

Earlier today on Shaquille O’Neal’s podcast, Shaq was discussing the Utah Jazz. While talking about the team, his co-host said that he believed Rudy Gobert could hold him to 12 points in a head-to-head matchup. Shaq didn’t seem to think the matchup would be nearly that competitive.

“12 points? Yeah, in the first three minutes. Let me tell you something, man. It’s against my religion for somebody to hold me one-on-one. I take that personally. I do.”

Shaq then went on to explain exactly how he would beat Gobert in the post.

“You know what I’m going to do to him? He’s a shot blocker. You can’t shoot a shot. You’ve got to back his little skinny ass up under the rim. Show him the ‘bow so he gets scared and just go up.”

Rudy Gobert later fired back in the comments section in response to Shaq’s claim.

Rudy fires back at Shaq in our comments 👀🍿 pic.twitter.com/ReqZZ6Z6WZ

Unfortunately for Gobert, this is not a battle he is going to win in the court of public opinion. While Gobert has been an impressive shot blocker throughout his NBA career, he hasn’t exactly locked down the league’s top centers.

Nikola Jokic hasn’t scored less than 24 points in any of his last 8 meetings with Gobert, scored 47 on Gobert in one of those games, and put up 24/6/6 in just 15 minutes against Gobert earlier this season. Karl-Anthony Towns averages 22 points and 11 rebounds against Gobert in his career. Joel Embiid has averaged 23.1 points and 12.3 rebounds per game against Gobert.

Gobert is certainly a good defender, but it’s hard to picture him “locking up” Shaq.