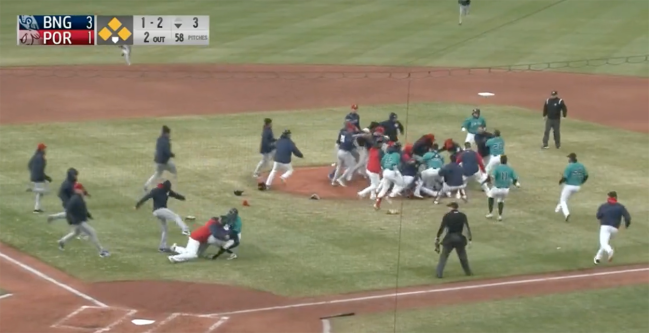 Flared tempers would be an understatement for what went down on Thursday night between the Portland Sea Dogs and the Binghamton Rumble Ponies. It was full-on mayhem.

There have been a lot of “bench-clearing” brawls in baseball. They used to get pretty crazy back in the day, but have been toned down to some extent in recent years.

That was not the case on Thursday. It was violent.

With one out in the bottom of the third inning, Binghamton pitcher Marcel Rentería hit Portland batter Tyreque Reed in the hands. As Reed made his way down the first baseline, Rentería was upset about something and shouted toward the umpire.

Whatever it was that Rentería said, it set Reed off and he changed course toward the pitcher’s mound. Reed went full-send at Rentería and cold-clocked him with a straight right hand.

Rentería stumbled backward and went down as Binghamton catcher Hayden Senger hurried to the mound and took Reed to the turf. As the scene unfolded on the bump, both dugouts flooded onto the field and started throwing some big punches at one another.

It got ugly quick and both sides were very much involved in the action.

After getting rocked by Reed, Rentería hopped up and got into it with another Portland before ending up in the bottom of a pile near home plate. He ended up leaving the game with an injury and Reed was ejected.

Here is how the entire brawl played out between the Rumble Ponies and Sea Dogs:

I don’t know what the pitcher said to Boston Red Sox prospect Tyreque Reed. But bet money he never says it again … pic.twitter.com/ZVR7G4LANH

Here’s another in-stadium look at the incident:

Here's the video I shot tonight from the benches clearing brawl at Hadlock between the Sea Dogs and Rumble Ponies! pic.twitter.com/rvfY27bc9w

Some suspensions, for Reed in particular, are sure to be handed down soon. No matter how things end up playing out, the Rumble Ponies and Sea Dogs will have some serious beef moving forward and tensions will be high.

Fighting is obviously not a glorified part of baseball. But… this was one of the best baseball fights we have seen in a long time. Vicious.