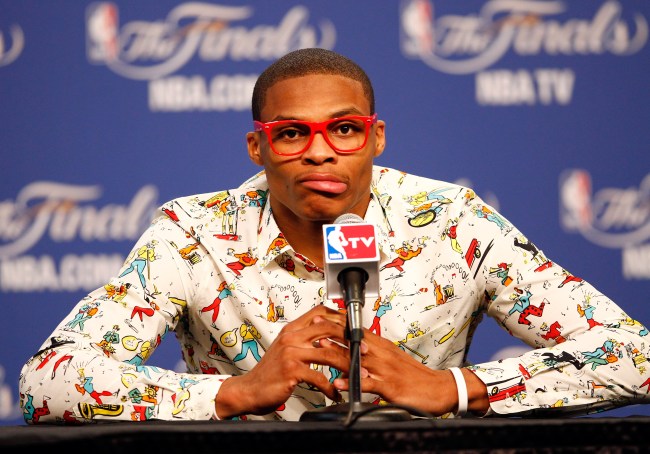 Look, Russell Westbrook isn’t the most efficient basketball player on the planet, but, shit, he’s absolutely one of the most talented. Remember, this is a guy who stacked the stat sheet from his league MVP season of 2016-17 through last year, when Westbrook averaged a triple-double in each one of those seasons. That’s insane, and goes to show how great his all-around game is.

Problem is, at least in his first season with the Houston Rockets, Russell Westbrook wasn’t quite the same player as he was in Oklahoma City. That’s partly because he’s playing alongside another ball dominant guard, James Harden, who sort of possess the same type of skills. And, given the tandem just got blown out by the L.A. Lakers in the second round of this year’s NBA Playoffs, some people are questioning Westbrook and his fit.

While we don’t know who said it, at least one anonymous NBA coach dogged Russ, even going as far as shitting on the All-Star guard for not being a good complement for anybody — which is quite the harsh claim given his previous accomplishments.

“Westbrook isn’t a good complement for anyone, in my opinion,” the coach said. “He has to be the main guy. He can’t shoot. He needs the ball. He’s not an off-ball player. Hard to play with two max guys who need the ball. Maybe it’s possible, but it seems like two good players instead of Westbrook would be better the way they play.”

Now, remember, this anonymous coach was speaking about Russell Westbrook’s fit alongside Harden in Houston, so the points referenced are pretty valid. Still, to suggest Russ isn’t a “good complement for anyone” is a major league diss, especially when considering Westbrook leading the league in assists in two of the past three years.

Look, the whole Westbrook-Harden thing may not work out because they play similar styles, that’s fair to question. But it sort of seems a little personal seeing this anonymous coach dog Russell Westbrook’s overall game; because, like other superstars in the league, he demands the ball and isn’t as productive when he’s playing off of it. Like, would LeBron James be as dominant without the ball? Hell no.

As the Rockets try to figure out what to do this offseason with their head coaching situation and overall roster, it’ll be interesting to see what it all means for Russell Westbrook. The dude is probably still a top-10 player in the league (when healthy and in the right situation), but has a massive contract that could hurt the Rockets if they plan to move him. Still, it seems a bit harsh to dog the dude like the anonymous coach just did.