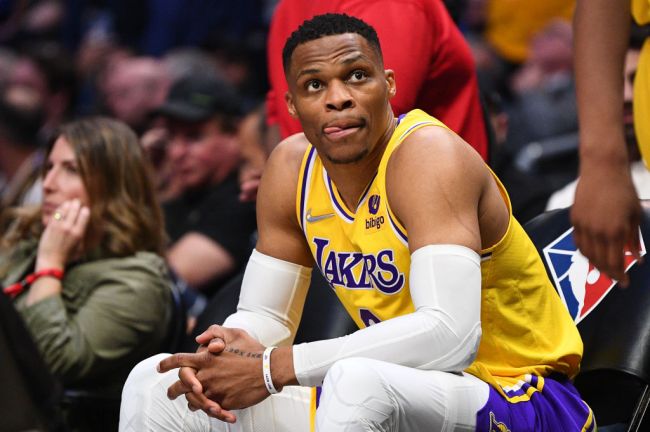 Russell Westbrook is fed up with fans heckling him.

On Monday night, Westbrook was seen arguing with a Spurs fan on the sideline who wouldn’t stop calling him “Westbrick,” a nickname that has picked up steam due to its use by Skip Bayless this season.

Russ wasn't having the disrespect 💯

Earlier in the day, Russell’s wife Nina Westbrook called out Bayless and blamed him for fans heckling her husband.

I’m tired you you @RealSkipBayless calling my husband out of his name. It is extremely childish. That is my name as well, and many other peoples name. You’re disrespectful, and I’m extremely offended by your behavior. You should apologize.

When I’m being harassed on a daily basis over basketball games, and I’m having obscenity’s and death wishes for me and my family sent my way because you’re expressing your “truth”, it’s hard for me to get on board with that.

noun
the expression of disapproval of someone or something based on perceived faults or mistakes.

It’s very important to understand the difference between name calling and “telling one’s truth.” It’s even more important when you have a platform and a network to share your “truths” with millions of people. It requires a certain level of responsibility.

If you are a public figure, you have to be responsible for the type of example you set. Unfortunately, you must keep in mind the consequences of your behavior.

My career is focused around encouraging and supporting others in living in their truth, finding their voice, and finding their peace. This is actually what I’m doing. My behavior aligns with someone who is speaking their truth.

My hope is that the amazing and talented players that come after him don’t have to be subjected to this type of shaming, name-calling, and public scrutiny for playing the game that they love.

Russell Westbrook addressed fans calling him “Westbrick” after the Lakers’ loss to the Spurs and revealed that he doesn’t like bringing his family to the game because of the namecalling.

Russ speaks on the criticism surrounding him, does not want to be name-shamed and called Westbrick pic.twitter.com/viTsKv5KNE 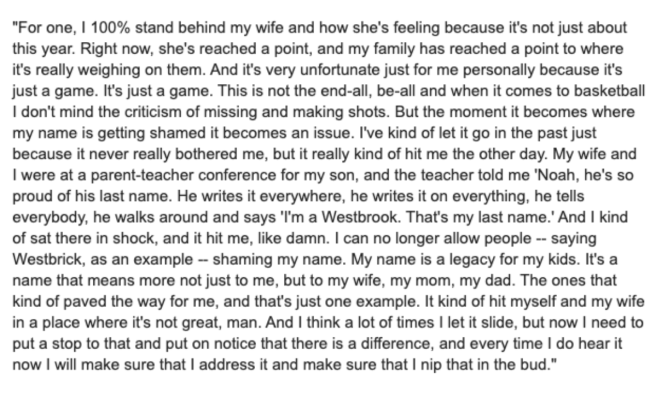