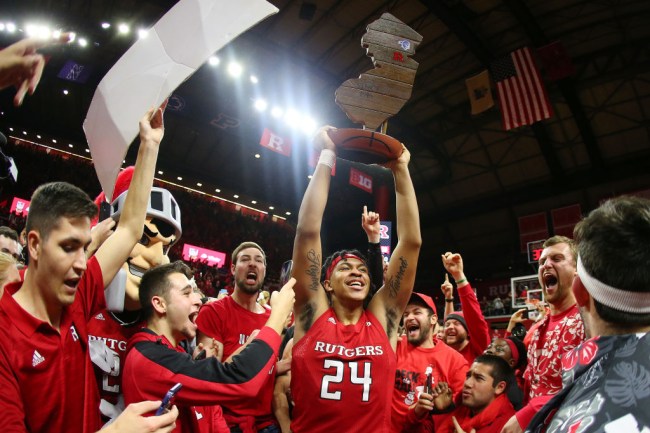 Talk about a horrible streak, I’m 27-years-old and in my entire lifetime Rutgers has never made the NCAA Tournament, but that’s going to change this year. The Scarlet Knights will be going dancing for the first time since 1991 after putting together an impressive 20-11 campaign and a fifth-place finish in the Big Ten.

I, like millions of others that don’t live in New Jersey, didn’t graduate from Rutgers or simply don’t support an abysmal sports school, couldn’t care less, but that’s not the case for super fan Brian Kelley.

Kelly attended nearly every single Rutgers basketball game, both home and away, between 2001 and 2017. During only three of those 17 seasons did the Scarlet Knights post a winning record, but that hasn’t kept Kelly from spending over $250,000 over the past two decades to watch Rutgers basketball in-person.

It’s pretty clear that this man has horrific luck, at least when it comes to his sports teams. I think he’s probably doing okay in his personal life to be able to spend a quarter-million bucks to travel the country to watch Rutgers basketball, but holy shit have his eyes seen some bad games.

Given this bad luck, the coronavirus timing isn’t all that surprising, but he’s not going to let the virus keep him away from his beloved Scarlet Knights at the NCAA Tournament.

“We finally breakthrough, have a great year, and all of a sudden, there’s this death virus that drops out of the sky from out of nowhere,” Kelley told NJ.com. “It just makes you wonder.”

I’m not really sure what he’s trying to imply with his ‘it just makes you wonder’ statement, perhaps this virus was brought into our lives just to keep Rutgers fans out of arenas as soon as the hoops team finally finds some success.

As plenty of sporting events around the world continue to get postponed and games are being played without fans in attendance, it’s starting to feel like a very real possibility the NCAA Tournament could keep fans out of arenas as well.

Kelley, however, says he’s going to be there in attendance as long as the NCAA doesn’t announce the shut down of fan attendance. He’s not worried about possibly contracting the coronavirus as long as he can see Rutgers play a game in the Big Dance.

“It’s certainly not going to stop me,” Kelley said, “and if you’re a diehard Rutgers fan, I don’t think anything will stop you short of them shutting the event down or playing the games with no fans (in the arena).”

Joe Lunardi has Rutgers as a No. 9 seed playing in Omaha his the latest Bracketology.