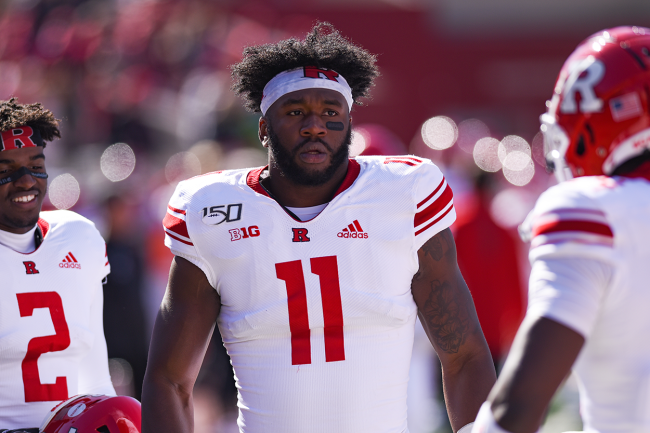 Singleton declared for the NFL Draft and accepted money from from an agent for training expenses. That would technically remove his amateur status and rule him ineligible.

However, the money has been paid back and Singleton is pursuing a waiver.

While a player who declared for the NFL Draft would not normally be allowed to return, the New Jersey native’s situation includes some unique circumstances. Singleton was injured in a bowl game that he was never supposed to play in.

Rutgers football went 5-7 last year. The Scarlet Knights did not qualify for a bowl game, but was the first alternate in case a team was forced to withdrawal due to COVID-19 concerns. They were tapped for the Gator Bowl against No. 20 Wake Forest when Texas A&M bailed.

As a result, Drew Singleton had a decision to make about whether to play in the bowl game or continue to focus on the NFL.

He was planning to go pro and had already started the NFL preparation process when his team got the invite to participate in the postseason. Most players in his position would have decided to sit out of the game, but Singleton chose to suit up with his guys one last time. He rushed back to Piscataway, practiced with his team, and played in the 38-10 loss to the Deacon Demons.

Unfortunately, Singleton suffered a badly sprained ankle during the Gator Bowl and had to wear a boot for three weeks. He believes that the injury held him back during pre-draft workouts, which may have played a part in him going undrafted.

In turn, rather than signing with a team as an Undrafted Free Agent, Singleton wants to play one last year with Rutgers and try to improve his draft stock. Another year in college could also allow him to try and capitalize on NIL opportunities.

Although he did not go into detail, Singleton sends money back to his parents in Newark and has two young nephews that he helps to support. NIL could allow him to make some money while pursuing a Masters degree.

The NCAA denied Singleton’s initial application for reinstatement. He has since appealed and is awaiting the decision, which seems like a no-brainer to allow him to return.

But the NCAA is going to NCAA, so it could go either way.