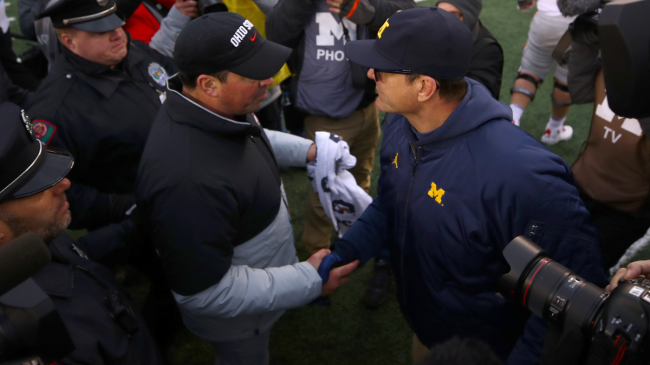 The Ohio State-Michigan rivalry game is one of the best, and most historic matchups in college football. With both teams currently sitting among the top three teams in the polls, the interest couldn’t be higher.

It’s a similar scene to what we saw last year, when the Wolverines beat the Buckeyes to advance to their first ever College Football Playoff. The winner of this year’s meeting will likely lock in a CFP berth, too.

Each team enters the matchup at 11-0. The winner will not only stay atop the rankings, but they’ll also clinch an appearance in the Big Ten Championship Game. The loser will all but be eliminated from the playoff picture.

For players, pride is on the line, as well as an opportunity to bring home a title. For the head coaches, there’s even more at stake.

The contracts for both Ryan Day and Jim Harbaugh include incentives that can help bolster the pot when it comes to a season-ending payday. Both are already among the highest paid coaches in America. Ohio State pays Day a $9.5M salary while Michigan’s price tag for Harbaugh sits at just over $7M a year.

To maximize those deals, certain accomplishments must be achieved. Those incentives include getting to the conference title game and the College Football Playoff.

According to a report from Sports Illustrated, the potential payouts total a combined $2.4M between the two coaches.

Harbaugh will receive a $500,000 bonus if Michigan wins the Big Ten East division title, which is on the line when the Wolverines face the Buckeyes. He would also have a chance to secure a $1 million bonus for winning the Big Ten championship and an additional $500,000 for making the College Football Playoff.

Harbaugh has a bit more on the line as his payouts total $2M. Day’s come in at $400,000, still a solid chunk of change should his team come out victorious.

Now, coming out on top in this game won’t guarantee that all of that money is added to the winning coach’s paycheck, though it will at the very least trigger the Big Ten East champion incentive. A win will, however, ensure that the remaining moneys are still up for grabs as this is the next step in securing a conference championship and CFP berth.

The loser will miss out on a hefty payday.