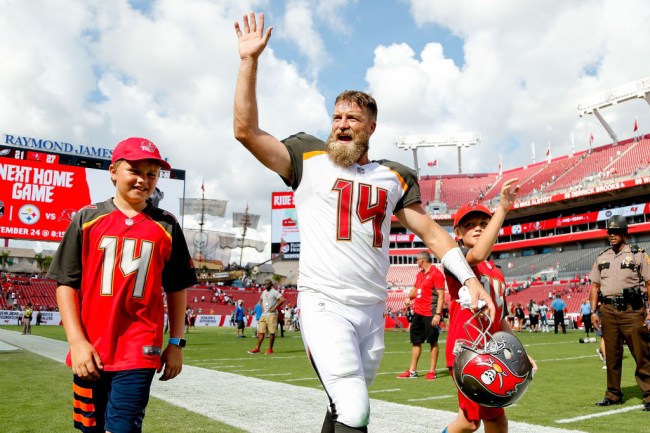 On Sunday, Ryan Fitzpatrick did the suspended Jamies Winston a fantastic disservice when he decided to go on an absolute tear during a game against the Eagles, which included a couple of impressive touchdown passes.

Over the first couple of games, Fitzpatrick has thrown for 819 yards and eight touchdowns and looked incredibly impressive on the field as he fights for what could eventually become a starting job.

I doubt many people expected Harvard football’s proudest export to perform like he has this season but shoutout to any fantasy owners who’ve managed to stumble their way into success thanks to his performance so far.

If only I had been one of them.

After the game, Fitzpatrick decided he needed to wear something as fire as his performance on the field was and decided to borrow an outfit from teammate DeSean Jackson before striding to the podium looking like this:

It’s nice to see Conor McGregor has decided to branch out into football after the whole “boxing” thing didn’t pan out as planned.

As is to be expected, the internet immediately took the opportunity to make jokes and I’m glad to report it did not disappoint.

Is Ryan Fitzpatrick really about to steal Jameis Winston’s job, AND his girl? pic.twitter.com/GgV8UjOIuM

Looks like Fitzpatrick is throwing down the gauntlet for crazy post-game conference outfits. Your move, Cam. pic.twitter.com/ab1eLZhW2f

Reporter: Ryan, you went to Harvard, can you please explain the outfit?

Ryan Fitzpatrick: Psh… who do you think sold those nerds all that blow so they could study all night? pic.twitter.com/iUuqDuJydJ

Fitzpatrick eventually cut the press conference short after saying he had to get the clothes back to Jackson, although he did acknowledge that the chest hair was all his.

Jackson proved Fitzpatrick was actually serious after striding into the press room without a shirt.

DeSean Jackson shows up shirtless at Fitzpatrick presser and Ryan says he has time for two more questions because DJack needs his stuff back. pic.twitter.com/fVr8fj93K4

He even acknowledged Fitzpatrick pulled off the outfit better than he ever could have.

I love it Fitz you wear it better than me .. WHEN YOUR QB WEAR YO FIT TO AFTER GAME PRESS CONFERENCE LMAO 😂😂 SWAGG AND THE JEWLS 💎💎 https://t.co/5dIthDK42Q

Winston still has one game remaining in his suspension and it doesn’t look like Fitzpatrick is going to decide to cool off at any point in the near future.

I can only hope that he’ll try to top this if he manages to stay as hot as he has.