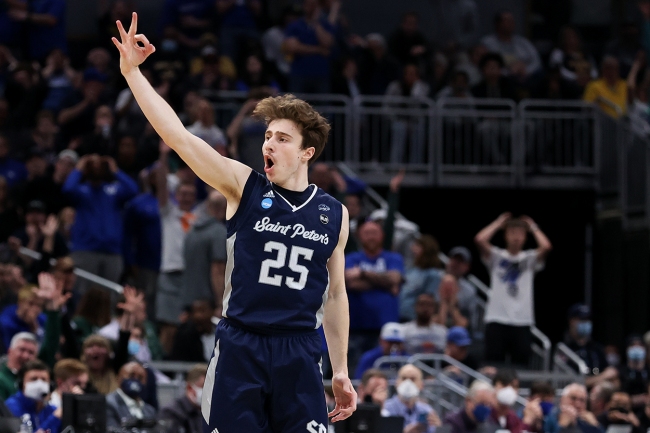 March Madness is officially mad. On Thursday evening, No. 2 seed Kentucky lost to No. 15 seed Saint Peter’s in the First Round.

The monumental upset marked only the 10th time since the NCAA Tournament expanded to 64 teams in 1985. At face value, the upset was crazy.

When you dive into some of the numbers, it gets even more insane.

That alone would be bananas. However, looking at some of the salaries between the two schools, it truly puts things in perspective.

Kentucky has four assistant coaches who make more money than Saint Peter’s head coach. Shaheen Holloway, who oversees the Peacocks, made $266,344 in 2019, including bonuses and value of benefits.

Meanwhile, Wildcats head coach John Calipari made a base pay of $8.5 million, which doesn’t included bonuses or benefits. That is nearly 31 times the amount of Holloway.

In addition, Kentucky’s top assistant coaches’ salaries range from $300,000 to $850,000. Those numbers top Holloway, who is the head coach at the school that beat them in the NCAA Tournament, by at least $50,000ish.

And it doesn’t stop there.

Eugene J. Cornacchia (Phd.) is listed as the Saint Peter’s Ex-Officio Trustee — President and makes $372,810. He is barely making more than the lowest-paid Kentucky assistant coach… as the president of a private university.

How cool would it be if the Peacocks made a run?!