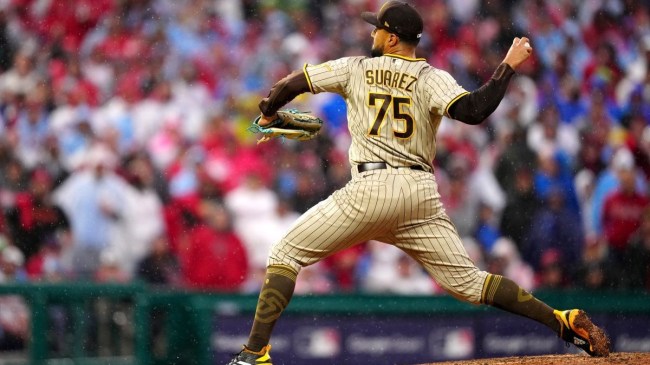 Right-handed relief pitcher Robert Suarez was an absolute revelation for the San Diego Padres in 2022. The 31-year-old Venezuelan signed with the Padres after spending the entirety of his prior career in Japan.

San Diego could have never imagined what would come next.

Suarez developed into one of the league’s most dominant relief pitchers. He made 45 appearances and pitched 47 1/3 innings. In those innings, Suarez amassed 61 strikeouts and posted an incredible 2.27 ERA.

Apparently, San Diego was so impressed by Suarez that it wasn’t afraid to break the bank to keep him around.

The Padres tied down Suarez through the rest of his prime on Thursday, inking him to an enormous five-year deal with $46M. The contract also allows Suarez to opt-out after three seasons.

Breaking: Robert Suárez and the Padres are in agreement on a 5-year deal worth $46 million, sources say. The contract includes an opt-out after 3 years. @MLBNetwork @MLB

The $46 million on its own is not a particularly gigantic number until you get into the context of the deal. At 31 years old, Suarez is also considered to be on the back side of his prime. He’s also not San Diego’s closer. That role goes to four-time All-Star Josh Hader, whom the club acquired at the trade deadline last season. Though Hader has just one more season before he hits free agency.

The deal is also surprising due to Suarez’s relatively small track record. He’s pitched just one Major League season and relief pitchers are historically volatile. If the deal works out and Suarez develops into an elite closer, the Padres look like geniuses. But they’re assuming some massive risk in the process for a player who turns 32 before next season begins.

Signing a 32 year old reliever with 47.2 career innings pitched to a 5 year deal. What could go wrong https://t.co/n0zfX3Hnqx

32 on opening day. Probably won’t end well but they’ll get a few seasons out of him https://t.co/luTqYBM8ed

God awful contract for a player with one year in the mlb https://t.co/FnEEsW5CnX

The Padres reached the NLCS last season before falling to the Philadelphia Phillies. And owner Peter Seidler has shown he’s not afraid to splash the cash. But the deal for Suarez may just be his riskiest move yet.