Saquon Barkley And Odell Beckham Jr. Rehabbing Together Should Have Giants Fans Worried 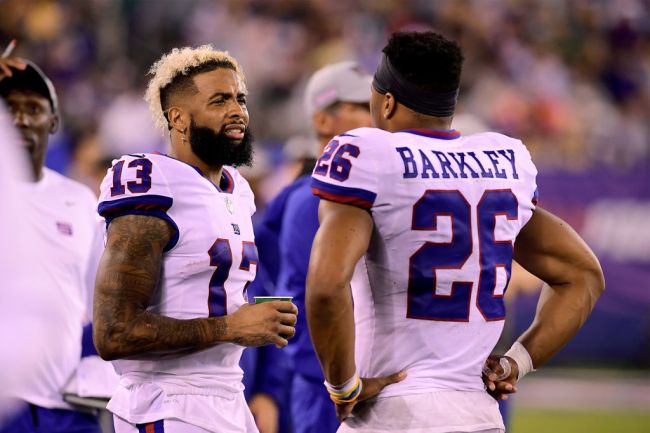 Saquon Barkley and Odell Beckham Jr. became good friends during their lone season as teammates with the Giants in 2018. The two both underwent knee surgeries less than two weeks apart after tearing their ACL’s so with a relatively similar timeline, the two are planning to meet up this offseason and rehab together.

Barkley recently spoke with ESPN’s Jordan Raanan explaining why he thinks it makes sense for the two to link up and rehab together.

“Only thing I do know that I have planned for sure, I’m definitely going to link up with [Odell],” Barkley told ESPN. “Obviously Odell tore his knee a little too. I think we both need just being there. We’re really good friends. Competing with each other and pushing each other will also be good too. That’s the only thing I know for certain I will do. Everything else is up in the air.”

“I think it’s very important that since we are really close and we know each other so well and we are two competitors and we think we can really help each other, I do think it’s important to really link up. But at the same time, we both have to come in with the mindset of getting 1% better each day. That’s what we have to get from each other. Any way you can get it.”

You can’t blame Barkley and OBJ wanting to rehab, train, and compete against one another while trying to get back to 100%. Going through rehab alongside a fellow NFL player that’s going through the exact same thing you’re going through sounds much better than not having someone like that with you. Barkley even extended an invite to Joe Burrow and other players that are going through similar injuries and rehab processes.

Having said that, if you’re a Giants fan and you see that your team’s best player is going to rehab with OBJ this offseason you have to be at least a little bit worried.

OBJ isn’t the most liked player in the NFL, from both a fan and front office viewpoint. There’s a reason the Giants shipped him out of New York and there’s a reason trade rumors follow him every single offseason. The Browns looked better this season without OBJ on the field and could be looking to deal the 28-year-old.

Odell only looks out for Odell, which is fine, the NFL is a ‘what have you done for me lately’ league, and with his injury history, who knows how much more he has in the tank, but Giants fans won’t want that mentality to rub off on Barkley. Whether it does or not, only time will tell, but rehabbing together this offseason certainly lends an opportunity for OBJ to have some influence on the 23-year-old Barkley.