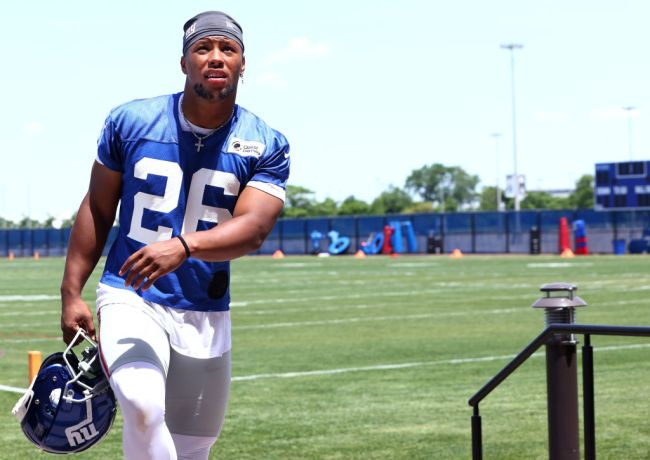 It’s that time of year again where Saquon Barkley gets to show off during New York Giants training camp. Usually that showing off just amounts to pictures of his enormous quads, but today it’s his skills on the field that are stealing the training camp headlines.

Success as a receiver isn’t exactly anything new for Saquon Barkley. In fact, there have been times during his career when the Giants have relied heavily on Barkley in the receiving game.

As a rookie, Barkley turned 121 targets into 91 catches for 721 yards and 4 touchdowns during a season where he won Offensive Rookie of the Year and earned a spot in the Pro Bowl. He followed that up with 52 catches for 438 yards and 2 touchdowns in year 2.

Last year, those number took a big hit during Saquon’s bounce back campaign from an ACL tear. He only managed 41 catches for 263 yards and 2 TDs, but that was at least 2 more touchdowns than Kenny Golladay managed for the Giants after they gave him a massive contract o be their top receiver.

It’s not clear where Saquon fits in the receiving game for the Giants in 2022. With Kenny Golladay, Kadarius Toney, Sterling Shepard, Darius Slayton, and Wan’Dale Robinson all in the Giants’ receiver room, Daniel Jones is going to have plenty of mouths to feed before he ever even considers throwing the ball to his running back.

If Saquon keeps making grabs like this, he just might be able to carve himself out a sizable role in the Danny Dimes-led offense.