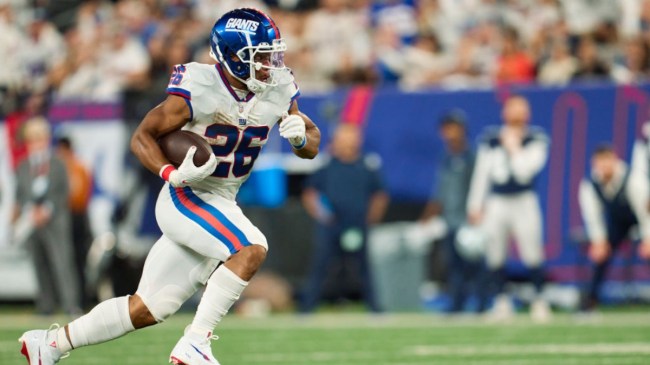 The New York Giants’ surprisingly strong start took an unfortunate turn on Monday night when they welcomed the Dallas Cowboys to the Meadowlands.

The Giants suffered their first loss of the season in a game where their offense struggled and only managed to find the end zone once. Even worse, they lost Sterling Shepard during the game.

The long-time Giants receiver suffered a torn ACL in the second half, leaving a passing attack that was already struggling without one of its most dependable receivers.

Now it seems Saquon Barkley has taken it upon himself to solve the passing game’s problems. He revealed yesterday that he was already recruiting a receiver for the Giants and it’s one that Giants fans are very familiar with.

Saquon revealed that he had talked to Odell Beckham Jr since Monday night’s game.

I actually just got off the phone with him last night, talking about [Shepard]. Odell, he’s a different cat — special, special player,” Barkley said during a recent interview with Tony Anderson of Sports Seriously. “I know that he’s doing everything he can in his rehab to come back even better, and you never know, maybe one day we’ll be back on the same team.

Unfortunately for the Giants, Odell doesn’t really seem to be an answer to their current problems. The Giants are very short-handed at receiver right now because of injuries and Beckham Jr wouldn’t fix that.

Odell isn’t expected to be ready to return until at least November, leaving the Giants with their current group of receivers for at least another month. By then, his addition could be too little too late.

Saquon might need to find another receiver to recruit if the Giants are going to figure out their passing game any time soon.