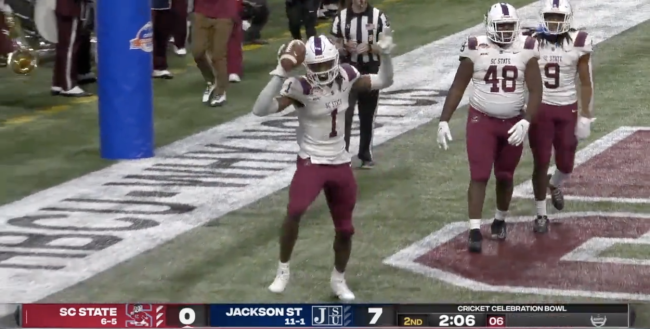 After falling behind 0-7, the Bulldogs battled back to take a 10-7 lead at halftime and they did it in savage fashion, rubbing it in Deion Sanders’ face.

With just over two minutes left in the second quarter, quarterback Cory Fields Jr. found receiver Saquan Davis for six. Davis stood up and broke out into a very famous dance— the “Primetime” Shuffle.

Sanders, during his playing days, was a flashy, high-stepping, loud-mouthing cornerback. Whenever he found the end zone, he would celebrate with his signature dance.

In this instance, Sanders was on the other end of his own shuffle.

Shaquan Davis reels in a TD and then hits THE PRIME! 😮 pic.twitter.com/GjYElBROje

Davis’ form could use some work. His knees could be higher and his steps could be wider, but it was less about the execution of the celebration and more about the message that it sent to the Tigers and their head coach.

As Davis did the “Primetime” shuffle, Coach Prime watched from the sideline. He took it in stride and couldn’t help but give his opponent a short, but well-deserved round of applause.

Jackson State went into the locker room down by three and was stunned in the second half as South Carolina State added two more scores and took a 24-7 lead with eight minutes left in the third quarter.