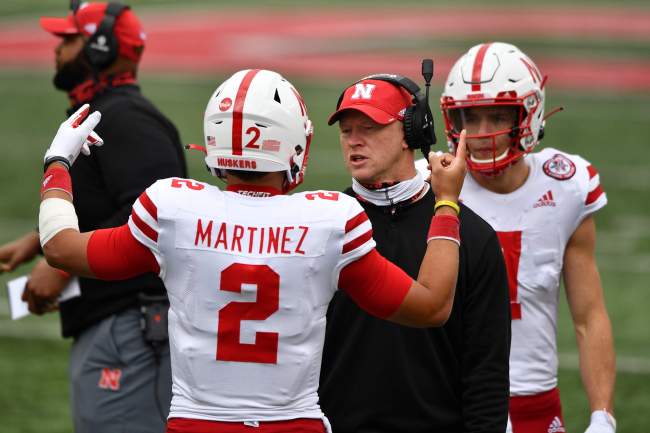 After a delayed start due to COVID-19, the Big 10 Conference began its conference-only schedule on Saturday. Fox kicked things off with National Championship hopeful Ohio State as the Big Noon game and a late touchdown became the center of postgame conversation.

Nebraska hung around through the first 18 minutes or so, but Heisman Trophy contender Justin Fields finished 20-of-21 for 276 yards and two touchdowns without an interception and added 54 rushing yards and a touchdown on 15 carries. Ohio State ran away with it in the second half and won the game 52-17, on the heels of a two-yard rushing touchdown in the final minute. Rather than take a knee at the goal line, freshman quarterback Jack Miller ran into the end zone.

After the game, Buckeyes head coach Ryan Day took the opportunity to apologize for running up the score in the postgame press conference.

“I feel bad about that,” Day said. “I had a younger quarterback in the game, and I didn’t feel like we had the personnel to take the knee, and I probably should have done that. So I just want to publicly apologize to them, to [Nebraska coach] Scott [Frost].”

First of all, not having the personnel to take a knee is hilarious. Sure, you might not practice the end-of-game routine with your backups during the walk through on Friday and that could run the risk of a botched snap. But come on, I can’t imagine that there is a single player on the roster that isn’t able to lineup in a goal line set, take the snap and put a knee on the ground. That’s just coach speak for not having an excuse.

Secondly, why are we apologizing in the first place?! I understand that there are unwritten rules, and sportsmanship, and blah blah blah. It doesn’t matter, the best teams in the country will have a chance to play in the College Football Playoff come early 2021. (So long as COVID-19 doesn’t have other plans, that is.) To be one of the best teams, you have to win football games. To win football games, you have to score as many points as possible while allowing your opponent to score as few points as possible. 45-7 looks different than 52-7, it just does. The optics of not taking a knee may be frowned upon, but I can’t seem to understand the reason for the taboo nature surrounding scoring more points. Keep the foot on the gas, step on the throat, don’t let up. Every coach in every sport has rambled through the cliches about closing out games, and now we have one of the nation’s top coaches apologizing for doing just that?!

As it would turn out, Nebraska head coach Scott Frost agrees with my logic. When asked about Miller’s late touchdown, he gave a pretty simple response.

Frost was asked about Ryan Day apologizing for that last touchdown late in the game, said he had no issue.

"If we want the score to be different we need to play better. That's the bottom line." #Huskers

No apologies. No hurt feelings. Play better and stop your opponent from scoring. Thank you for your sanity, coach Frost.