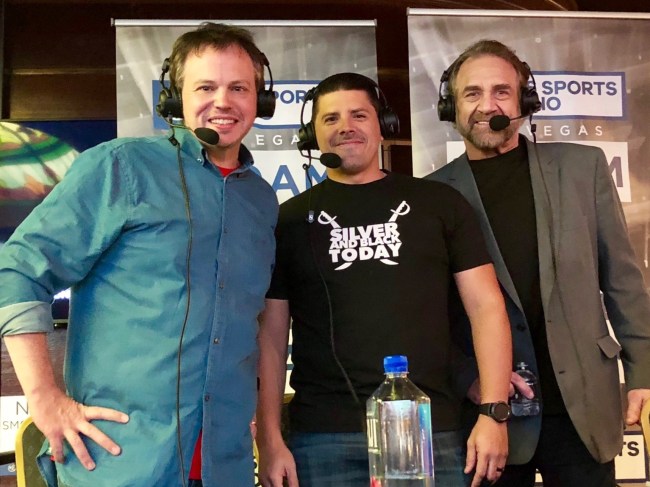 Scott Gulbransen is many things. He’s a family man with five kids. He loves guitars and, in particular, Eddie Van Halen. He’s a cigar guy and has a passion for Las Vegas. More than anything, Gulbransen knows a good opportunity when he sees it.

A diehard football fan, he was paying close attention when the Raiders of Oakland, Los Angles, San Antonio, Delaware and Bahamas went looking for yet another moving company – this time en route to Las Vegas. The National Football League, of course, subsequently gave Raiders owner Mark Davis and his amazing bowl-cut official approval to relocate on March 27, 2017, after the state approved a $1.8 billion stadium funded by a hotel tax in Clark County.

Gulbransen decided to embrace the Raiders move in a meaningful way.

“As I watched the events unfold, and having the desire to be more of a creator and combine my love of football, I decided to just grab up a ton of URLs related to Las Vegas and the Raiders,” he says. “This was three years before the team would call Vegas home but I knew I wanted to create a news site and be an early entrant to capture an audience already there, but also be ready as the buildup to the move came.”

Recognizing he wouldn’t make a dime until 2020, Gulbransen broke open the piggy bank with a focus on the long haul – producing high quality content, building a base of professional contributors, and even breaking Raiders news when possible.

“” knew the traditional media would cover it,” says Gulbransen. “But I wanted to be more agile and be able to go in-depth on the stadium construction, the Raiders move and more.”

Plus, he realized in spite of the vast landscape of Raiders-focused websites and blogs, most of them were fan sites – some of them very good. But they weren’t news sites.

“I have a very strict policy with our writers,” he notes. “No fan or homer type content. If writing a column, state your opinion but we’re really building a journalistic business here.”

So he launched the Las Vegas Raiders Report which a year later rebranded to Silver and Black Today due to the immensely positive fan reaction to the site. It includes both a blog and podcast and content tends to center on the platform’s unique selling proposition – the future home city to one of the NFL’s most iconic teams.

“It was rough to begin with until I got the right folks involved,” Gulbransen says of the podcast. “But we started doing it live at a local cigar lounge and then moved it around and developed a great listener base and even had sponsors.”

After the initial success of the site including the podcast which was recorded live through Spreaker, landed a meeting with the head of radio conglomerate Entercom in Las Vegas which was looking to develop local sports programming on their CBS Sports Radio station.

“Within two minutes of pitching the Silver and Black Today Show, he greenlighted it and wanted us to start ASAP even though it was the offseason,” Gulbransen added. “He shared our vision of jumping out ahead of the 2020 move and wanted to establish the station as the place where people go to hear and talk about the Raiders. Entercom has been amazing and has shown unbelievable support for what we’re doing and how we do it.”

Early returns on the radio show have been strong despite launching in March, but from the outset, the focus has been on being “different.” During the slow summer period, Gulbransen did interviews with authors who had written books about the Raiders or Raiders greats. Plus, he’s worked to have a strong mix of other guests like former Browns GM Michael Lombardi Vinny Bonsignore of The Athletic, and peppered in local journalists who cover the team.

Great meeting @vinniepaul3 tonight @vegasgoldenknights game! As good a dude as he is a musician! Thx bro! #VegasBorn

Show was a hit to start…which enabled us to also get and host a new NFL postgame show – entitled THE PG – now after the late games on Sunday. We start by first reviewing the hometown Raiders action and then go around and highlight the NFL’s biggest games and scores. Even though it’s a much different show (and I have a different co-host), the Silver and Black Today brand was directly responsible for Entercom asking us to do it.

Demand for Silver and Black’s content has been far beyond what Gulbransen imagined thus far and he said the hardest part is simply feeding the beast with ongoing content. More than anything, he believes the future is bright for not only the Raiders, but Las Vegas.

“Las Vegas is experiencing a pro sports renaissance with the Golden Knights, the WNBA, possibly the NBA and now the Raiders,” he said. “It’s that environment and opportunity that drove me, and more than anything, it’s great for the growth of our community.