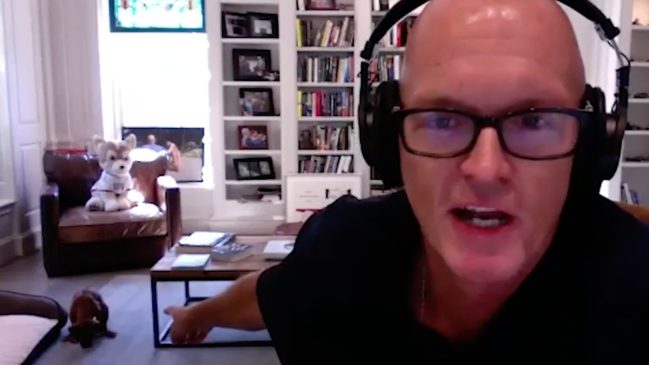 Anyone who’s been lucky enough to have a dog in their lives knows there’s really no way to describe the unique emotional bond that forms when you’re tasked with taking care of an animal who will usually repay you in the form of an endless amount of unconditional love.

However, ESPN anchor Scott Van Pelt did what he could to sum up that special connection earlier this year when he used his “One Big Thing” segment to deliver an incredibly touching eulogy to Otis, the Very Good Boy who sadly passed away in April.

Otis was a staple of interviews and other remote segments the broadcaster conducted from his home, as he could almost always be seen curled up in a leather chair in the corner of Van Pelt’s office.

Anyone who’s had to deal with the death of a furry best friend knows it’s impossible to truly fill the void that’s left behind when they’re gone. There are some people who will never attempt to replace their pet, but plenty of others eventually decide to recapture that joy by welcoming another canine into the fold.

That’s what SVP decided to do this month, as he recently showed off the newest addition to his family when he posted a picture of a puppy named Redd earlier this week.

Goes by Redd. As in (Otis) Redding and Reading, Pa. where he’s from.

This picture got me. Big paws to fill. Whatever he is will be plenty. pic.twitter.com/FyhdiuCcGe

Van Pelt recently joined Kevin Clark of The Ringer for an episode of Slow News Day where Redd picked up where Otis left off by making his way into his owner’s office while the show was being recorded.

However, they were forced to temporarily put things on hold thanks to a minor incident that led to Van Pelt announcing “Redd’s taking a s—t” before both men broke out into applause.

Tomorrow, new SND guest @notthefakeSVP joins the show. He has a new puppy. His puppy did…this during the taping. This is one of the best moments in SND history.

So we made a trailer for tomorrow's episode.

I can’t think of a better way to announce you’ve arrived than that.