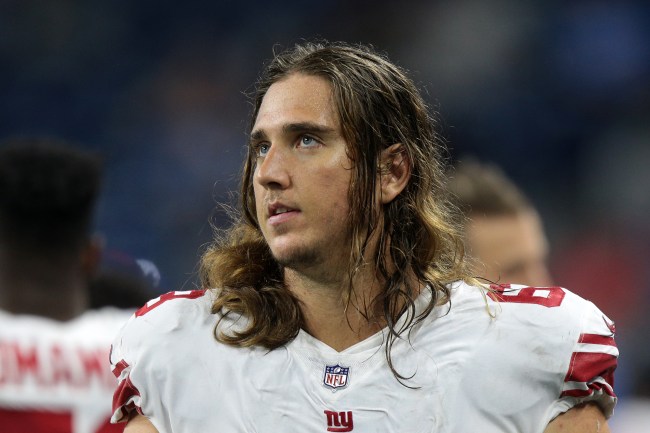 Backup offensive tackle for the Seattle Seahawks Chad Wheeler was arrested early Saturday morning on charges of domestic violence and the details on the incident are pretty distturbing.

According to the Seattle Times Wheeler was arrested after police responded to a 911 call from his girlfriend who told them she was being “killed.” The police reportedly forced their way into the apartment after they heard screaming when they arrived and found Wheeler standing next to his distressed girlfriend inside the bathroom.

A Kent Police Department report said police responded to a call of a woman who was locked in a bathroom following a “physical fight” with her boyfriend.

The victim had called 911 to state that she was being “killed.” Police were advised that she had suffered a dislocated arm and was bleeding.

According to the police report Wheeler is accused of throwing his girlfriend on the bed and choking her until she lost consciousness because she refused to bow to him during an argument.

The report said the incident began when Wheeler asked the victim to bow to him, and when she did not he grabbed her and threw her on a bed.

The report said Wheeler then strangled the victim before she lost consciousness. The report also said when she regained consciousness, Wheeler was standing near the bed and said, “Wow you’re alive?”

The victim then ran into the bathroom where she called 911 and family, according to the report. Wheeler picked the lock on the door and entered before officers arrived.

Wheeler’s girlfriend posted pictures and provided horrific details of the incident on social media on Tuesday night. Apparently, Wheeler continued to eat dinner next to her unconscious body after he believed had strangled her to death.

Chad Wheeler of the @Seahawks tried to kill his girlfriend because she wouldn’t bow to him. He was even surprised at her survival.

If you’re not outraged, you’re part of the problem. @NFL handle this swiftly & decisively. pic.twitter.com/R2IF1HwMow

Wheeler is currently out on bail after posting a $400k bond as he awaits his next court date.

Update: The Seahawks released a statement on the Wheeler situation.

Update #2 Wheeler apologized for the incident on Twitter and says he was going through a “manic episode.”

Events happened over the weekend that transpired from a manic episode.  I am deeply sorry for the pain and suffering that I have caused to Alleah and her family.

I apologize profusely for the turmoil that I have caused to my family, teammates, fans and those closest to me. The most important thing right now is that Alleah gets the care she needs and I get help.  Both are happening.

It is time for me to walk away from football and get the help I need to never again pose a threat to another. I cannot express my sorrow or remorse enough. I am truly ashamed.