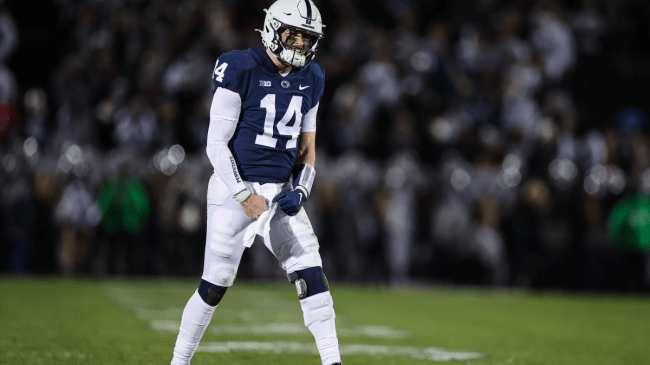 The Penn State football team took down rival Michigan State over the weekend, beating their Big Ten foe by three scores. The impressive win was the Nittany Lions’ tenth of the season as they closed the 2022 campaign strong.

QB Sean Clifford shined in the win, posting one of his best performances on the year. The senior passer threw for 202 yards and four touchdowns to lead his offense to a 35-point outburst. That output helped him leave a winner in his final home game.

But a win didn’t seem to be the only thing on Clifford’s mind. It appears that he was motivated by the betting lines when closing out the contest.

A video of Clifford on the sidelines has surfaced showing the quarterback celebrating his team’s performance. But he wasn’t satisfied with the big lead, he wanted more.

He appears to utter the words, “We have to cover,” while talking to a teammate on the bench.

The spread for the game opened with Penn State as 16-point favorites. That number quickly jumped to -19.5 by week’s end. While the Nittany Lions led throughout the game, jumping out to a 21-3 lead, the Spartans were able to close the gap to five points in the fourth quarter.

Sean Clifford then threw a pair of late touchdowns to not only put the game out of reach, but also to cover for anyone who had the spread at -19 or better. Both of those scores came with less than five minutes remaining in the game, with the final TD coming at the 3:56 mark while his team held a two-score lead.

One sports account wrote, “Sean Clifford is the people’s quarterback.” Another person posted, “OK, this makes me love this dude.”

For those Penn State backers, they’re celebrating alongside Clifford for padding his stats on those final two drives. Clifford’s knowledge of the sports betting lines might make the Nittany Lions a popular pick come bowl season.