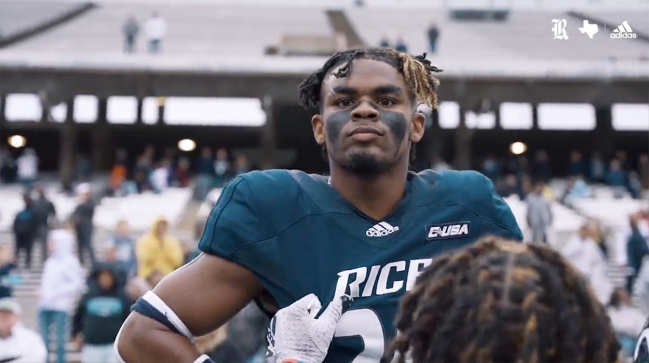 On November 27, 2007, four burglars broke into the home of Sean Taylor and shot the 24-year-old safety in his upper leg, causing his untimely, tragic death. 14 years later, on Saturday, Taylor’s brother, Gabe, made a clutch play to seal the win in Rice’s 2021 finale.

Needless to say, the ballhawking traits that made Sean Taylor one of the most dominant safeties in NFL history run in the family.

And on Saturday, Sean was looking down on his little brother.

Louisiana Tech was down by four with only 19 seconds remaining. At Rice’s 33-yard-line, Bulldogs quarterback rolled to his left and threw an errant pass downfield.

On the other end, Gabe Taylor was in the right place at the right time and hauled in the interception. Knowing that he had won the game, Taylor quickly slid to the turf and was mobbed by two excited teammates.

On the 14th anniversary of Sean Taylor's passing, his younger brother @iamGabeTaylor clinches the Owls' win with an interception in the final seconds vs. Louisiana Tech. #GoOwls👐 x #RFND pic.twitter.com/8TBQNUKaKa

Although the game did not make a difference in terms of bowl eligibility, Rice’s win finished the year on a high note and it came in special fashion. Taylor, who was playing on the anniversary of his late brother’s passing, was the hero.

A special moment at Rice Stadium❤️

Hours before Gabe’s game-sealing interception, the Washington Football Team announced that it will be building a physical memorial for his brother at FedEx Field. The team retired Sean’s No. 21 earlier this year.

With a little bit of extra motivation in his heart, Gabe honored his brother by making a play, just as he would have. His interception helped Rice snap a four-game losing streak to cement its best finish since 2015.

Gabe, a freshman from Miami, ranks second on the team with three interceptions. He also earned Conference USA Player of the Week and the Paycom Jim Thorpe Award earlier this season. He earned the honors by recording 10 tackles and a forced fumble against UAB.

His brother, watching down over him, would be proud.