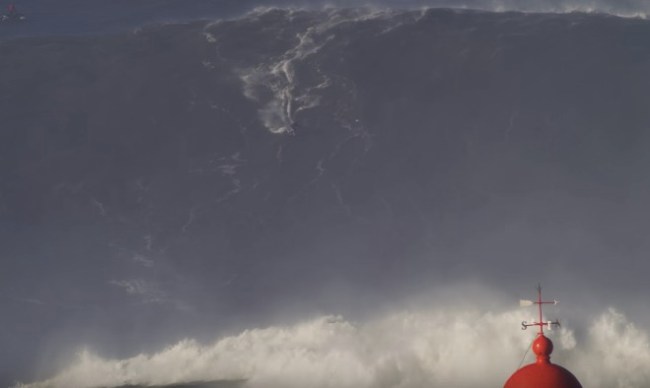 There are a handful of places on the planet where pro surfers can expect to ride giants throughout the year. Jaws, Puerto Escondido, Mavericks to name a few. Over the past few years, there’s been one location that’s produced waves larger than anyone ever imagined. Surfers flock from all across the globe to Nazaré, Portugal, a tiny town about halfway between Lisbon and Porto.

Nazaré has gotten hit with some legendary swells recently and last weekend Sebastian Steudtner was filmed riding one of the largest waves ever seen before. This is legitimately the size of a mountain:

Here’s another look at just how massive the waves were last weekend in Portugal:

I was in Portugal two weeks ago and I, unfortunately, didn’t get to make it to Nazaré to watch the surfers ride skyscraper-sized waves. I caught sight of some massive waves near Porto so I can’t even begin to comprehend how f’n massive the Nazaré surf break is in person. I’m not a good surfer. I wouldn’t dream of trying to paddle out in waves that size, not without training every day with a professional for several years. But I’d still love to see those waves in person because there’s nothing else like it on planet earth. You can be standing on the cobblestone and watch someone ride a 100-foot wave just yards away…So who’s down to plan a Portugal trip? I’m already ready to go back.