SEC Realignment: Breaking The Conference Into These 4 Divisions Makes The Most Sense With The Addition Of Texas, Oklahoma 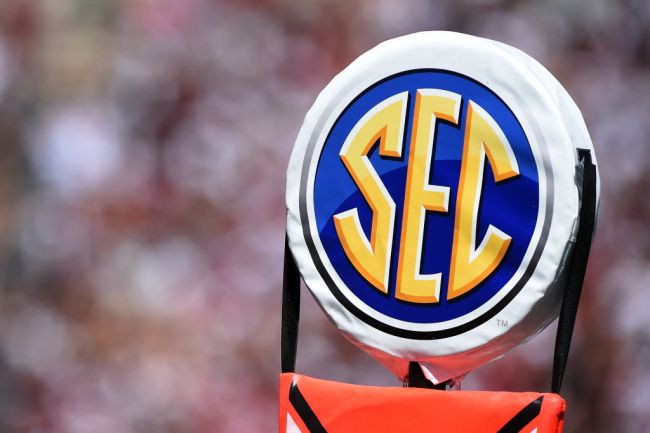 Nobody was expecting too much to come out of SEC media days this week, but then the Houston Chronicle decided to drop a nuclear news bomb by reporting both Texas and Oklahoma have reached out to the SEC about joining the conference.

Reports, even ones of this magnitude, turn out to be bogus all the time, but as time keeps passing, other reports keep suggesting that this scenario has some serious legs.

By no means is this a done deal, there are a lot of moving parts to deal with here and none have fallen into place yet. However, that doesn’t mean we can’t assume that the Longhorns and Sooners do join the SEC sooner rather than later.

Now we start playing the hypothetical game as to what a 16-team superconference may look like.

While the SEC could elect to add Oklahoma to the SEC West and Texas to the SEC East, or vice versa, breaking away from the two-division setup and creating four new divisions made up of four teams each makes the most sense.

The SEC Network itself is leaning in that same direction of a four-division setup.

SEC Realignment: What A Four-Division SEC Could Look Like

For the sake of keeping the SEC’s traditional ‘West’ and ‘East’ division titles, we’ve added ‘North’ and ‘South’ for consistency purposes. However, the actual geographical locations of each university isn’t the only factor in play.

Trying to find a somewhat balanced group of four teams to make up each division – based on current success, tradition, and rivalries – will be the real challenge. Each team would have two permanent cross-over opponents that they would play each season and each team would host every team in the conferences at least once every four seasons.

This is the biggest head-scratch of a division on the list with Texas A&M listed, but for balance purposes, you’ll see why this makes sense when you see the other division setups.

Rejoining the old Big 12 foes of A&M and Missouri could create a fun rivalry, while Tennessee and Kentucky would keep their hatred for one another raging, with that much more on the line in just a four-team race for the division.

People of Florida and Georgia could very well burn their states to the ground if they aren’t in the same division, having them in the same pod is a no-brainer.

Vanderbilt is the outlier here, as per usual, but if you were to swap the ‘Dores with the Aggies in the SEC North, for example, the consistency in each division would take a hit. Plus, if we’re going to do this whole realignment thing, lumping Vandy in with Tennessee, Kentucky, and Missouri would just be hitting play on a movie we’ve seen far too many times.

Rule No. 1 for the SEC if this realignment does happen will be to keep Alabama as happy as possible, and this division checks that box and many others.

The Iron Bowl would be that much more intense with just four total teams battling for a division title. The same would be said for the Egg Bowl between the Rebels and Bulldogs.

We could also go ahead and call this ‘the best tailgating division’ in the conference as well.

This would undoubtedly be the best of the four divisions on paper, but it also makes a lot of sense geographically. LSU’s rivalry with Arkansas – which has dwindled a bit over the years – would mean that much more each season while The Red River Shootout would carry that much more weight being an in-division matchup.