Sergio Garcia Threw A Bunker Tantrum, Then Got DQ’d For Damaging Greens At The Saudi International 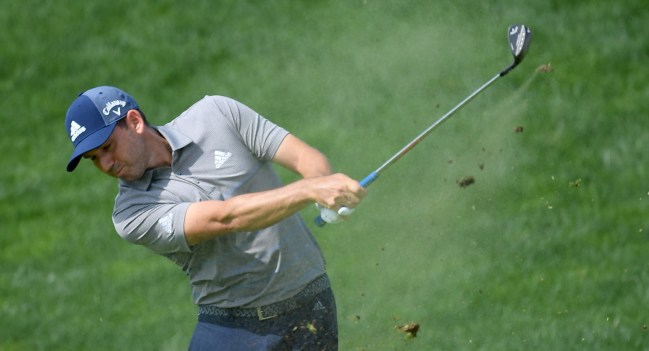 Sergio Garcia is 39-years-old, has 34 professional tournament wins including the 2008 Players Championship and the 2017 Masters. And yet on Saturday he was disqualified from the European Tour’s Saudi International after throwing a tantrum befitting toddler and intentionally damaging at least five greens on the course.

Under a new rule, Garcia was DQ’d for “serious misconduct” during the third round at Royal Greens Golf & Country Club after competitors from at least four groups complained about damage to the greens as they followed Garcia around the course.

According to The Scotsman…

Garcia caused damage to five greens on the front nine, mainly through dragging the sole of his golf shoe across the top of the putting surface in frustration but also leaving a divot mark on the sixth green, which was still apparent during the final round even though greenstaff had quickly repaired it on Saturday.

Players in the next four groups complained to officials about the mess Garcia had made and, after finishing his round, the 39-year-old was disqualified under Rule 1.2a, which allows for that action to be taken if a player has committed serious misconduct.

Accepting the punishment, Garcia said: “I respect the decision of my disqualification. In frustration, I damaged a couple of greens, for which I apologise, and I have informed my fellow players that it will never happen again.”

While no video has surfaced (yet) of Garcia intentionally damaging the greens, there is video of a hissy fit he threw on the par-5 fourth hole when his ball landed in a bunker and it took him two shots to get out of it.

SkySports reported that Garcia was “less than impressed with his lie, blaming the way the bunker had been raked for his ball finishing in an awkward position in the sand.”

Garcia will reportedly not be suspended for his actions in Saudi Arabia, but as you will see on the video below, he certainly needs to be put in time-out for a few minutes until he can better control himself.