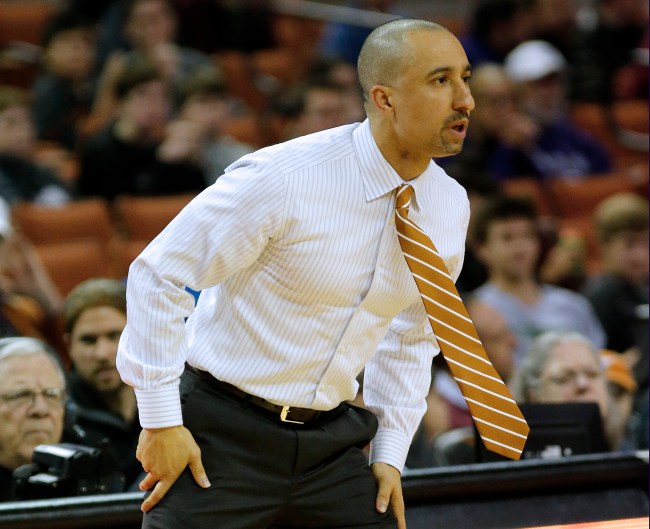 For as long as anybody can pretty much remember, Shaka Smart has had a shaved head. College basketball fans first got familiar with the shiny dome when the head coach led his VCU team to the Final Four during the 2010-11 season, and, since moving on to coach the Texas Longhorns, Smart’s bald head has remained a staple.

That is, until now, because a picture of Smart recently popped up on Twitter with hair and, oh boy, is it bringing all sorts of feels to college hoops fans. Just take a look at the image below and see for yourself why it’s definitely… something.

Shaka Smart with hair is the definition of 2020 pic.twitter.com/R9H9vrt66b

As the tweet above states, of all the weird things that 2020 has brought us, Shaka Smart with a wild, untamed hairdo is definitely among the strangest. Like, who even knew Smart wasn’t just completely bald and could even grow hair anymore, let alone the amount he was sporting during his team’s game against Texas-Rio Grand Valley last week? It’s a look, man, but one that might need to be cleaned up a bit, because people on Twitter couldn’t believe what they were witnessing.

Bruh I was looking at the sidelines trying to find him and was like "did Shaka get fired??" 🤣🤣

I was not prepared to turn on the TV and see Shaka Smart with hair. pic.twitter.com/HUeZDz5g9b

While college basketball fans couldn’t believe what the hell they were seeing on TV, Shaka Smart with hair could be just the thing to get his Texas Longhorns to finally live up to expectations this season. After all, the team’s currently 2-0 and are ranked in the top-25 at the moment, and some analysts believe this could be the best team Smart has ever had during his five-plus seasons in Austin.

This is Shaka Smart’s best team in Austin. They have one of the nations top front-court’s with an experience backcourt. Long and super athletic. A very well played game. @TexasLonghorns with a great finish against a very good @DavidsonMBB team. @espn

Smart’s Texas teams have always had high expectations, but they’ve never really lived up to them, having only reached the NCAA Tournament two of his five seasons, but never advancing past the Round of 64 in either one. Could Shaka’s new hairdo be the spark that changes the fortunes for the Longhorns? Who the hell honestly knows, but the dude’s team is undefeated in two games so far this season, so fans of the Burnt Orange sure are hoping the head coach’s locks bring some luck to their hoops team.