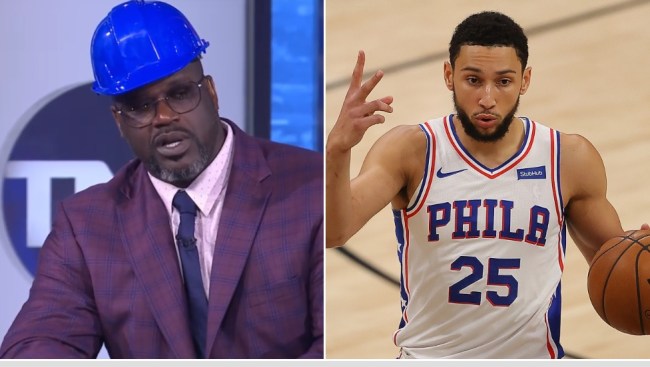 Ben Simmons’ poor play in the playoffs seems to have rubbed Shaq the wrong way.

On Sunday night, the Sixers were eliminated by the Hawks in game 7 and Simmons, who didn’t take a shot in the fourth quarter, is getting much of the blame for the team’s loss due to his lack of aggression late in games during the series.

After the game, Simmons took responsibility for the loss and admitted that he had to work on his game this offseason.

Ben Simmons: "I didn't shoot well from the line this series. Offensively, I wasn't there. I ain't do enough for my teammates, but there's a lot. There's a lot of things I need to work on."

Shaq saw Simmons’ quote and blasted the Sixers’ guard by saying that if Simmons were his teammate he would’ve “knocked his ass out.”

"if he was In my locker room I'd knock his ass out" pic.twitter.com/uNIgiFzHCd

“If I played game one and two and I know I’m not helping my teammates what do you think I’m going to do in game 3? It don’t take seven games to realize that, I don’t wanna hear that man.

It don’t take seven games for you to know that you’re not playing right, get right. He didn’t get double-teamed, just be aggressive, that’s all I want. I don’t want to hear all that, stop that.

If he was in my locker room I would have knocked his ass out. I don’t want to hear that, get out of my face with that.”