Shaq Randomly Deciding To Pay For This Guy’s Engagement Ring Will Make You Smile, Something He Sets Out To Do Everyday 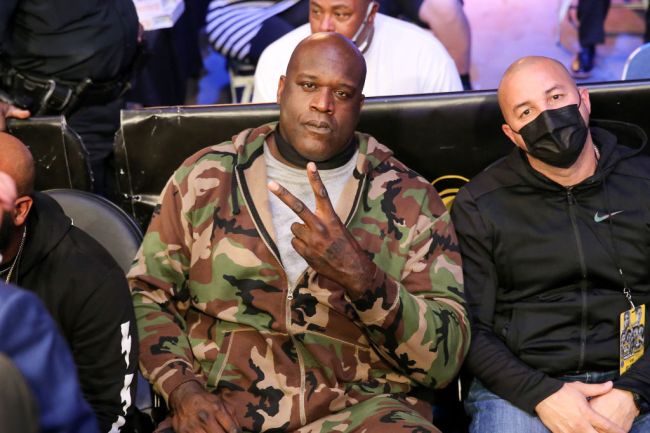 Shaquille O’Neal is the realest. The 49-year-old is not only one of the best basketball players of all-time, but he continues to be a genuine dude who loves to spread the love. His most recent good deed has gone viral on social media after he was looking for some new earrings in an Atlanta-area jewelry store and ended up buying an engagement ring— not for himself, but for another man in the story.

The gesture was caught on camera and you can see Shaq casually pull out his black card (nbd) and slide it to the store employee who is ringing up the transaction. No pun intended. Instead of trying to make a big deal of the moment, the Big Diesel asks the man’s name, shakes his hand, pats him on the back and continues on with his day like it was nothing.

Shaq deciding to pay for this man’s engagement ring out of nowhere is why he’s the realest to ever do it. 💍👏pic.twitter.com/m6HJX5zjfE

Shaq spoke about the moment on the NBA on TNT and his telling of the story made it that much more awesome.

“This happened yesterday,” he said. “I was in Zales looking for some new earrings, and I saw a guy. I seen the guy come in — he was just so shy. He was saying ‘Hey, how much do I owe to pay off my ring?’ and I was like, ‘My man, how much is the ring?’ I’m not going to say the amount, but it’s not a lot for me. I was like, ‘You know what? Tell your girlfriend I got her, I’ll take care of it.'”

And he did. The ring was on layaway, and even after some initial pushback from a man he described as a “young kid, hardworking guy,” Shaq made sure that it was on his tab.

While he and the man were both wearing masks, they took a picture together and you can see a big smile. If the Big Aristotle had just paid off your debt for your engagement ring, of course you’re going to smile.

"I'm just trying to make people smile… That's all."@SHAQ helped a young man out at a local jewelry store by paying for his engagement ring. pic.twitter.com/eK8n0YHGb7

If Shaq’s story had ended there, it would have been awesome. However, he continued to talk about his mission to do a good deed every time he leaves the house and told a story about his recent experience furniture shopping with his mom.

“This lady, she had an autistic daughter,” he said. “And she was also looking to pay for some furniture and I just took care of her. So, I’m into making people happy.”

Mission accomplished. Not only has he made people happy with his play and his on-court, and on-air demeanor, but Shaquille O’Neal is out in public picking up tabs for people just because he feels as though it’s the best way to live. How can you not love him?!