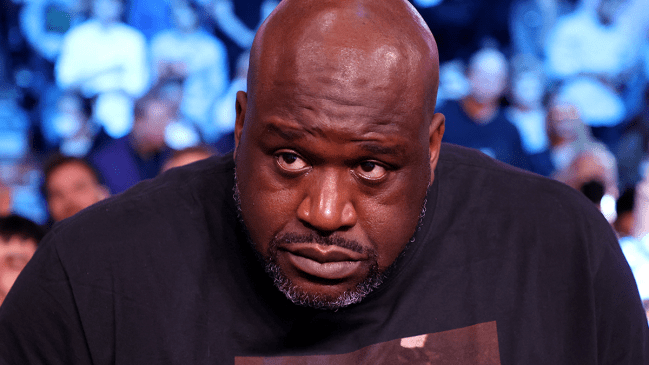 There are plenty of reasons Shaquille O’Neal was as dominant as he was during his legendary 19-year career in the NBA, but much of his legacy can simply be attributed to the fact that he is an absolutely massive human being.

The 7’1″ center was drafted by the Magic with the first pick in the 1992 NBA Draft thanks to his ability to effortlessly do things someone his size seemingly had no business attempting in the first place during his time at LSU—like running the floor and going coast-to-coast with ease (which he continued to do during his time in Orlando).

Shaq came into the league weighing around 300 pounds, and while he got noticeably larger (and slower) with the Lakers and in the years leading up to what’s unofficially known as the “Fat Shaq Era,” he still walked away from basketball as one of the most dominant big men to ever step onto the court.

Anyone who keeps up with Inside the NBA knows O’Neal didn’t exactly pull a Joe Thomas and undergo a fairly drastic physical transformation after retiring. However, that’s slowly but surely starting to change.

Shaq says he’s dropped around 35 pounds after tipping the scales at more than 400 lbs. and revealed the interesting reason he plans to shed more weight

Last month, the first-ballot Hall of Famer made some waves after posting a shirtless picture at the gym showing off the impressive physique he’s recently been able to cultivate.

Shaq addressed that photo during a chat with Logan Paul and Co. during a live recording of the Impaulsive podcast and explained why he decided it was time to shed some pounds as well as his motivation for doing so.

I was looking at myself and I had that Charles Barkley retirement body. I didn’t want my stomach to be over the belt anymore. So I was just like, ‘Let me go ahead and get slim.’ After that [picture] went viral, now I’ve got to live up to it.

If it works, it works.