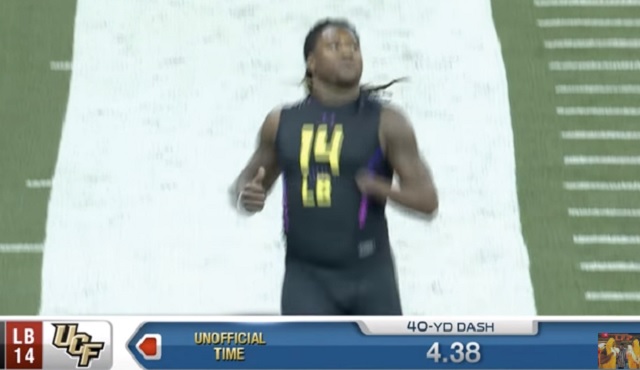 A few months ago Shaquem Griffin was the feel good story of the NFL combine when he crushed the 40-yard dash by running an insane 4.38 which was the fastest time posted by a linebacker at the combine since 2006.

Unfortunately, Griffin’s 40 time at the combine was actually 4.58 seconds due to a faulty clock which led to the former UCF linebacker sliding all the way down to the fifth round of the NFL draft this weekend.

He moved into the top 100 on many boards and was rated as a third-round pick. However, NFLDdraftScout.com learned that Griffin’s great clocking at the combine was incorrect because the clock started a little late. It was estimated his time was closer to 4.58 seconds.

Still a good time, but not in that elite 4.3-second territory. But, on balance, it made only a little difference in his overall rating and because he was THE feel-good story at the combine, the timing incident was not reported.

However, NFLDraftScout.com learned that many teams repositioned him on draft boards, but still considered Griffin an excellent prospect. For them, his so-called slide from the top 100 to 141 was no surprise, but his on-field credentials predict he will be productive in the NFL.

In the end Griffin is in the NFL and has a chance to prove himself on the field despite the 40 yard time error.