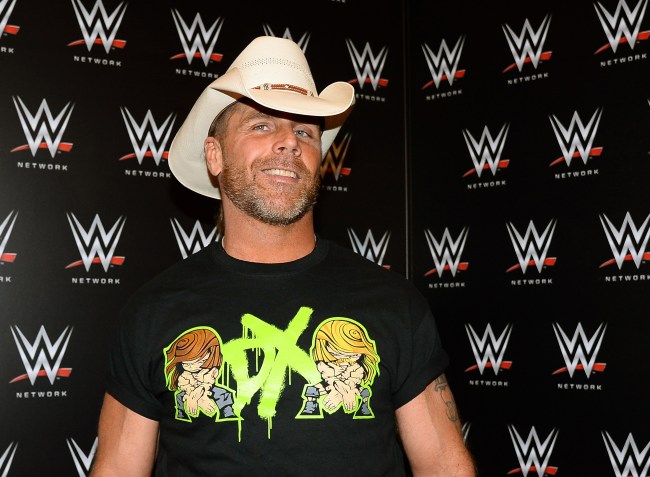 LAS VEGAS, NV - JANUARY 08: WWE personality Shawn Michaels appears at a news conference announcing the WWE Network at the 2014 International CES at the Encore Theater at Wynn Las Vegas on January 8, 2014 in Las Vegas, Nevada. The network will launch on February 24, 2014 as the first-ever 24/7 streaming network, offering both scheduled programs and video on demand. The USD 9.99 per month subscription will include access to all 12 live WWE pay-per-view events each year. CES, the world's largest annual consumer technology trade show, runs through January 10 and is expected to feature 3,200 exhibitors showing off their latest products and services to about 150,000 attendees. (Photo by Ethan Miller/Getty Images)

Shawn Michaels Returns to the WWE to Celebrate RAW25, Talks Exclusively with JWS

The WWE celebrated the 25th anniversary of Monday Night Raw on Monday night, airing the show from both Manhattan Center (site of the 1st episode of RAW) and Barclays Center. Dozens of WWE legends (including Stone Cold Steve Austin, the Undertaker and Razor Ramon) participated in the celebration. Just hours prior to the event, JWS got the exclusive opportunity to talk to The Heartbreak Kid, WWE Hall of Famer Shawn Michaels, about the first episode of RAW, his original idea of success and a brief phase where he tried on “the whole nature boy thing.”

JWS: When Monday Night Raw started on January 11, 1993, no one could have imaged it would become the longest running weekly episodic show in U.S. TV history. Did you know it was going to be a success from the start?

Shawn: I was sort of skeptical, because I was raised on the traditional Saturday morning, late Saturday night programming that we always had in the past. Monday nights. Live. Prime-time. It was so new, so different; I guess, I was like “how long is this going to last”. We had no idea that the first show was going to be the foundation of what would become the WWE. More importantly, from the personal perspective, there was no security back then in this line of work. 25 years later, you’re sitting there going jeez I wonder how much I’m going to put in the old 401K this year. You just felt like your future was so iffy back then and honestly, this was the show; it was Raw going live on Monday Nights on USA that was the foundation for everything that would be in our futures.

JWS: I’m glad you brought up your 401K, because no one gets into wrestling for the money; but, by the 90’s you were headlining PPV’s and making a lot of it. Did the money matter to you or was the success you were having most important?

Shawn: Honestly, it (the money) wasn’t (important). When I was young and I first started doing this, it was just “I want to be a wrestler” and then “I want to make it to the WWE”. I can remember my idea of success was gosh, if I could just have my own one-bedroom apartment and my own car; that would be awesome.

JWS: You may not have gotten into wrestling for the money, but you made a ton of it; yet, from what I understand, you’re a pretty regular guy. You never wanted to live the “limousine riding, jet flying” lifestyle?

Shawn: So, I went through a brief phase of that. I tried on the whole being the “nature boy” thing. Then one day you look at yourself in the mirror and you’re like “look dude, you’re a redneck from San Antonio, Texas”. So, you say to yourself, maybe I’ll just have a nice watch. But yeah, I drive a truck, I live a regular life. I’m not all that flashy and it bodes well for the saving aspect because except for some gym and hunting stuff, I don’t spend a lot of money. Ultimately, it’s the more responsible thing to do. You also have to figure nothing lasts forever, so you can’t be a pinhead about it. I’ve gotten to live my dream since I was 19 years old. It’s my time now to help my children live theirs. It’s not exciting and sexy, but it is the reality.

Howie Long-Short: WWE shares ($33.47 as of the close on 1/22) are price just shy of their all-time high ($33.85). Shawn Michaels was among the company’s biggest names when it went public in ‘99, so I suspected he may have received some equity at the time. I asked Shawn if he still owns any WWE stock?

Shawn: I do. When they went public, we all got some and then there were some other moments over the years that I’ve gotten more. You (finance) guys always say that for the most part, you stay in that stuff for the long-term and it will generate the best results; so that’s what I do. I know that every WrestleMania it always seems to go up and you think, should I sell now; but I’ll probably just do the long-haul. I know me well enough, I’ll take whatever it is that I need to live on and let my wife and kids figure out the rest after I’m pushing up daisies.

Fan Marino: Following his first retirement in 1998, the HBK was the WWF Commissioner. As NFL Commissioner Roger Goodell earned $31.7 million in 2015, the last year his salary was publicly reported. I asked Shawn if the compensation he received as WWF Commissioner was comparable?

Shawn: I don’t think so (laughing), but like Goodell I wasn’t a good one! (more laughing)

Target (TGT) has announced that as of February 25th, all stores and Target.com will carry an exclusive line of Umbro soccer apparel, footwear and equipment for kids. The collection will include more than 90 items, including shorts, cleats and shin guards; ranging in price from $4.99 to $19.99. Target will be the only U.S. mass retailer carrying the English brand.

Howie Long-Short: Umbro is owned by the Iconix Brand Group (ICON), a brand management company that owns more than 25 global consumer labels including Candie’s, Pony and Starter. Those who follow ICON won’t be blindsided by news of the Umbro/Target partnership; CEO John Haugh said in late December (Q3 ’17 earnings) that the company would be actively managing its brands to expand market reach “with existing distribution partners and into new partners.” The comments came as ICON reported Q3 ’17 licensing revenue declined 12% YOY (to $53.2 million). Previously owned by Nike, ICON bought Umbro in 2012 for $225 million.

Fan Marino: In 2016, Target (TGT) saw sales of soccer-related items grow 10%; faster than any other sporting goods category. So, in 2017, TGT initiated the largest teams sports push in company history; becoming an official partner of MLS, an official partner and the jersey sponsor of Minnesota United FC and the official retailer of U.S. youth soccer. The company also pledged $14 million to youth soccer, as the company looks to continue growing participation in the sport (9 million played in ’16); an $8 million local grant program (supports registration fees, equipment, coaching etc.) and a $6 million partnership with the U.S. Soccer Foundation to build 100 new soccer fields by 2020.