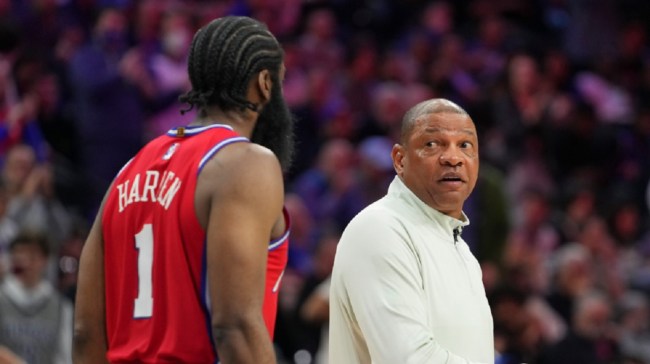 Things aren’t looking good for the Philadelphia 76ers a week before the playoffs.

On Thursday night, the Sixers collapsed in the fourth quarter and lost to the lowly Pistons team.

The Sixers are COLLAPSING against the Pistons!

Detroit has outscored Philly 29-10 in the 4th quarter 🤯 pic.twitter.com/fATyvn9Vbd

After the game, Rivers refused to blame his bench for the loss and then appeared to name James Harden, who shot 4-15 from the field for the night, as the main culprit for the team’s second unit struggles.

The Sixers' bench was outscored 39-8 on Thursday night, which Doc Rivers doesn't think showed that they struggled. More importantly, he thought it said more about James Harden, in a quote that will soon be analyzed to death: https://t.co/3lHrQaPpfw

Doc Rivers says James Harden is the problem on the #Sixers #NBATwitter pic.twitter.com/bJVI2lw9bV

“They didn’t struggle,”.”They didn’t get a lot of shots, in their defense. I think during that stretch it was more James [Harden] than them. Yeah, it’s just a tough night.”

Doc Rivers: "I thought offensively, we really just stood around"

Attributed lack of bench scoring more to Harden and how he played/the offense ran during bench minutes. Some full quotes pic.twitter.com/VdIBrg4f9M

Uh oh now Harden is gonna take the next 8 months off https://t.co/T6tIJh2rAx

When Ben Simmons was on the 76ers, Doc Rivers never blamed him for a poor performance in a regular season game. Today, he threw his new all-star James Harden under the bus https://t.co/FtHJ0IqL42

Aye man Doc just be throwing his players under the bus LMAOOOOO https://t.co/d1Tna3ksbG