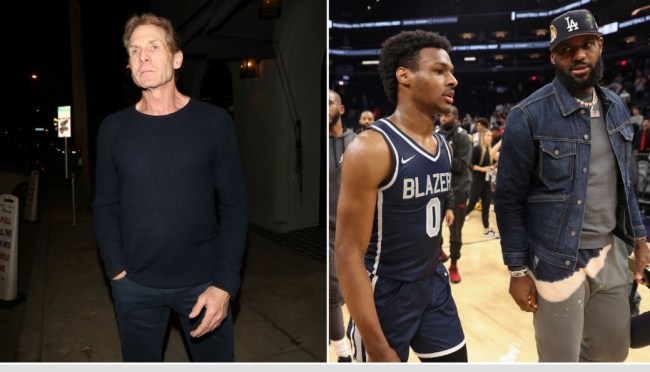 Skip Bayless is already ready to hate on a potential LeBron-Bronny James father/son duo in the NBA.

On Friday, it was reported that LeBron James would consider leaving the Lakers to team up with his younger son if he gets drafted.

Report: LeBron James willing to leave Lakers in order to play with Bronny

"But he’s made it very clear that he wants to play with his son. If that situation is available outside L.A., he’ll pursue it.” https://t.co/cv7q9IrX4L

“But after June of 2023 has come and gone (and James’ current contract with the Lakers will have expired), there could be a new destination on James’ landscape … provided he has not already switched teams prior to that in order to increase his chances of winning another title. “LeBron likes L.A., he likes raising his family in L.A., and his post-career businesses are in L.A. But he’s made it very clear that he wants to play with his son. If that situation is available outside L.A., he’ll pursue it.”

Not long after Sheridan’s report went viral Bayless fired off a shot mocking the potential duo.

He hating 3 years ahead that's next level hate https://t.co/Fl7XgUHCIq

Hating on 2 generations of James’ would be transcendent lmao https://t.co/JBwsneMwOj

Skip is already hating on seasons that haven't even happened yet 😭. Elite level trolling https://t.co/FxM5riIbRD