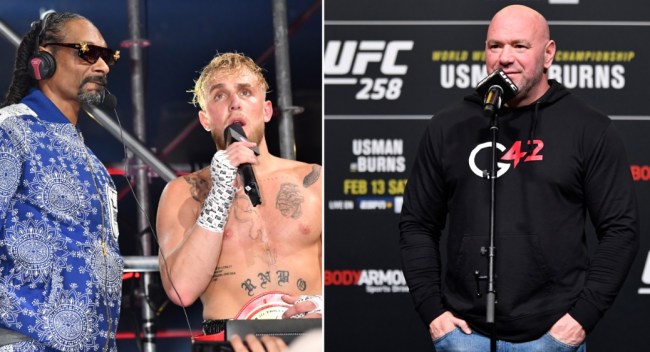 Last month during an appearance on Mike Tyson’s Hotboxin podcast, White was willing to put up a million dollars against Paul in his fight against former UFC fighter Askren.

“Let’s be honest, Jake Paul isn’t a fucking boxer. He’s a YouTube kid,” W. “I bet a million fucking dollars that he loses this fight.”

Snoop fired back at White and challenged him to put up $2 million instead of the $1 million.

“Hey Dana White, I see you got faith in your boy right? Going up against my guy Jake,” . “You say you got a million? You’re the CEO of UFC. You got more than a million. Put up TWO. Put up $2 million and we’ll match it.”

During Saturdays Triller fight night, Paul knocked out Askren in the first round and Snoop could be heard celebrating the fact that he had just won $2 million.

After the fight, Snoop called out White and asked him “where my money at?”

.@jakepaul had a dream. @SnoopDogg asking @danawhite "where my money at?"#TrillerFightClub pic.twitter.com/i12mLie0nP