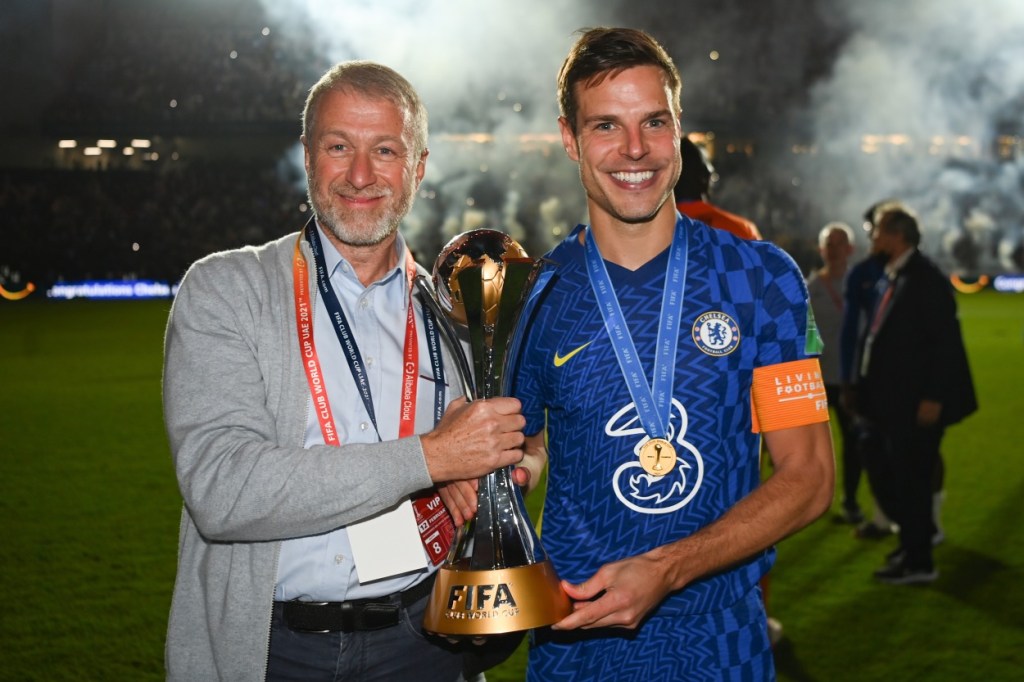 The dual Russian-Israeli citizen Roman Abramovich first announced his intention to sell the club about a week ago. Then on the morning of March 10th, the hammer came down on Roman Abramovich when the UK announced sweeping sanctions on Putin’s close associate.

The UK’s sanctions on Roman Abramovich freezes all of his UK assets including Chelsea F.C., but the club has been granted a special license to continue operating with extreme restrictions. Chelsea will be able to play games and the players will get paid but the club cannot sell tickets, they can’t sell merchandise, they can’t sign new players or work on contracts, no catering service is permitted.

In the wake of these sweeping sanctions on Roman Abramovich, the soccer world took to social media to express their thoughts.

The Soccer World Responds To News Of Sanctions On Roman Abramovich

Massive news: Roman Abramovich sanctioned. All UK assets frozen. Chelsea can still operate under a special licence but sale now on hold. Club will not be allowed to sell any more tickets – only season ticket holders can go to games for the foreseeable future.

Also: no merchandise sales allowed; no player transfers or new contracts; catering services will be permitted.

Just to clarify: anyone who has bought tickets for Chelsea games before today can attend, including season ticket holders, but no new sales permitted

What Are Chelsea Football Club Fans And Rival Fans Saying?

The reaction to this Chelsea / Roman Abramovich news spans the full gamut of emotion. Some fans are reacting with practicality and discussing the immediate impact on jobs and the local economy. Others are ‘dancing on their grave’ or celebrating Chelsea’s demise after years of success under the stewardship of a Russian oligarch and close confidant of Vladimir Putin.

True colours shown by those now dancing on the grave of Chelsea Football Club as the bent, corrupt, reprehensible government hang a question mark over the jobs of thousands.

It's not just Roman Abramovich losing here. The collateral damage is unfair and unjustified.

Anyone who sees this as an attack on Chelsea and not the owner is delusional. This is 100% about the Russian oligarch and 0% about the club.

Chelsea may get a 9 point deduction penalty if they end up in administration.

Punishing The Fans isn't the way forward…Clearly proves there is a campaign against My club chelsea f.c…. the club needs it's fans now more than ever , we got a UCL to lift cooome on Chelsea 💪…we shall overcome This Is Chelsea Football Club …. pic.twitter.com/tU3flpfnci

What a horrible person the owner of Chelsea Football Club is. https://t.co/Ir4FJhsIg6

During lunchtime on Thursday in London, Chelsea F.C. released a statement about the sweeping sanctions on the club and how it pertains to operations:

By virtue of his 100 per cent ownership of Chelsea FC plc and affiliated entities, Chelsea FC would normally be subject to the same sanctions regime as Mr Abramovich. However, the UK Government has issued a general licence that permits Chelsea FC to continue certain activities.

We will fulfil our men’s and women’s team fixtures today against Norwich and West Ham, respectively, and intend to engage in discussions with the UK Government regarding the scope of the licence. This will include seeking permission for the licence to be amended in order to allow the Club to operate as normal as possible. We will also be seeking guidance from the UK Government on the impact of these measures on the Chelsea Foundation and its important work in our communities.

The Club will update further when it is appropriate to do so.

It defies all reason that the UK government would want to punish Chelsea Football Club, its fans, employees, and vendors for the sake of punishing ownership. It seems like the government would be wise to build a bigger fence between Roman Abramovich and Chelsea FC as quickly as possible so it doesn’t damage the club for years to come but the flip side of that could be just as likely, only time will tell.

It will be very interesting to see how Chelsea’s players react to this news. With uncertainty about future contracts in the air and the club being held in limbo, that could drive the players to respond in a variety of ways.