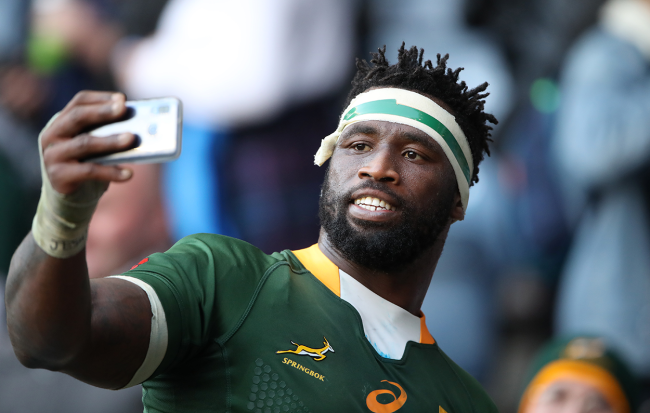 As the final whistle blew over the weekend, South Africa rugby and its fans were ecstatic about a hard-fought win over Scotland. The 30-15 victory came in front of a full-capacity crowd in Ediburgh at BT Murrayfield, the largest stadium in Scotland.

Despite the predominantly home crowd, the Springboks supporters could be heard throughout the stadium in jubilation. As South African captain Siya Kolisi stood on the pitch for his post-match interview, the crowd erupted.

Kolisi, after acknowledging the crowd, discussed the road atmosphere as the fans chanted his last name and blew vuvuzelas.

After the loud and proud post-match interview concluded, Kolisi ran to join his team in their victory lap around the stadium. At one point, a fan caught his eye.

The fan, standing in about 35-degree (Fahrenheit) weather, donned only a speedo. His name was Jack Denton and he grew up on the Eastern Cape of South Africa, where he became a big Kolisi fan.

Although he now resides in Edinburgh, his fandom has not wavered. Thus, when the team came to town, he knew he would not miss the chance to see his favorite player in action.

He had a plan. He was going to wear a speedo.

“Leading up to the game, I did manage to see him on the street with Dillion Leyds on the Friday and told him I’d be bare in Murrayfield in my Speedo and if he could after the game, I’d love his signature,” Denton told Eyewitness News.

Well, after the game he and his fellow Springbok fans managed to get Kolisi’s attention. The South African captain ran over to the stands, hurdled the advertisement board and met up with Denton.

He then proceeded to sign Denton’s speedo, slap him on the butt, give him a hug, and take off to continue the lap.

Denton was beside himself.

“I have been describing the bum tap like ‘fresh summer breeze to the tushie,'” Denton said.

The whole thing was hilarious and the resulting video is a testament to just how crazy international fans are, especially when it comes to their rugby.