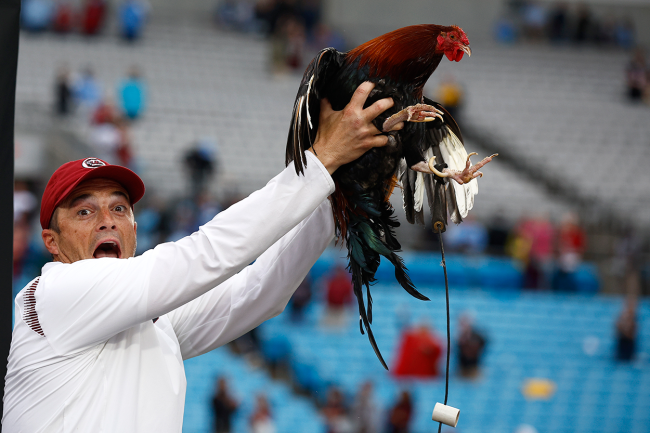 According to David Cloninger of The Post and Courier, Sir Big Spur may not be in attendance this fall because of an aesthetic issue. Kind of.

The current five-year contract between Sir Big Spur’s owners and the university expired on August 1st. As the two sides look to come to new terms, there is a disagreement about appearance.

The owners, Beth and Van Clark, took over responsibilities from Mary Snelling and Rob Albertelli in 2019. Sir Big Spur VI then passed away in 2021.

Because all Gamecocks are aggressive to some degree, three other roosters who were in line to potentially become the next Sir Big Spur received tryouts at baseball games that spring. However, there was a clear difference in their appearance.

Prior to fighting, the comb atop a rooster’s head is clipped.

It is a red “crest” on top of the bird’s head and under its beak.

“They’re each part of the birds’ heat regulation systems because, in an outstanding piece of trivia, chickens cannot sweat,” explains Cloninger. “The comb and wattle act as a sort of ‘air conditioner’ in the birds’ circulatory system — hence the red — and the cooler blood then passes back through the rest of the bird’s body.”

The old owners of Sir Big Spur removed the comb to make it look like a traditional Gamecock. The new owners, however, want to break what has been tradition for over 20 years and keep the comb on the bird.

As a result, the old owners are refusing to renew their contract with the university and will not relinquish rights to the name Sir Big Spur unless the comb is clipped.

“A chicken is a chicken but a fighting gamecock is something different. This is dumbing down the Gamecocks,” Albertelli said to The Post and Courier. “Whenever a new coach goes to a school that’s been struggling, you always hear a statement similar to, ‘You’ve got to change the culture.’

“I don’t know what culture in our day and age means, but if it means making a gamecock look like a chicken, or not hurting him because it might make the chicken feel good, it’s not preserving what we’ve built. This is dumbing down our culture.”

Snelling and Abertelli are willing to give the Clarks permission to use the ‘Sir Big Spur’ name if the comb is clipped, but he Clarks do not want to clip the comb.

This puts South Carolina in a sticky spot. The school still wants to use a live rooster at sporting events, but because of Albertelli’s unwillingness to share the rights to the name, ‘Sir Big Spur’ may be a thing of the past.

As a result, when the Gamecocks begin the 2022 season on September 3rd against Georgia State, a live rooster mascot is expected to be on the sidelines. But, more than likely, he will have a new name.