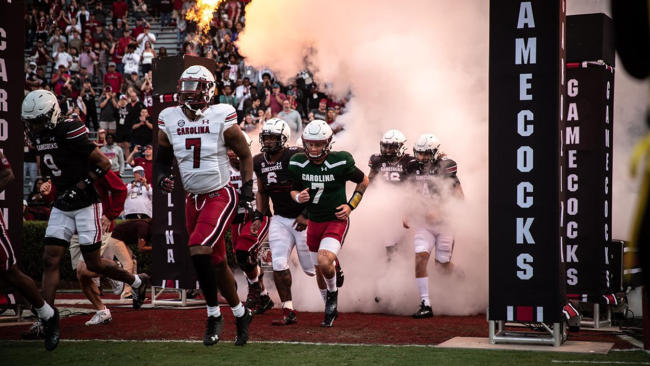 Spencer Rattler is hoping to turn things around at South Carolina in 2022 after a tumultuous career at Oklahoma. Based on what his teammates have to say about the former five-star quarterback, it sounds like he is already shaking things up in Columbia.

Jordan Burch, a former five-star defensive end in the Class of 2020, has played three seasons with the Gamecocks. He recently shared his perspective on Rattler, which is obviously unique because he is coming at him from the defensive side of things.

While analysts, coaches and fans can form their opinions, Burch has literally seen it first hand. His experience with Rattler during the transfer quarterback’s first practice with South Carolina really let Burch know how different of an athlete that he is.

“My first practice rushing against Spencer, he rolled out and threw a sidearm,” Burch said in a press conference. “I’m like, ‘I haven’t seen this in a while.’ I was like, ‘Oh my gosh.’ … I’ve been getting after him, but he still completes the pass. He’s pretty good. And it’s good having him around. I like what he’s brought to the table.”

Considering that Burch is one of the top players at his position, he knows what it’s like to go up against opposing quarterbacks. He has seen quite a few in his day.

Going against a former preseason Heisman Trophy candidate from a year ago in practice is no joke. It makes the defense better and Burch has seen that first-hand.

“Getting off the edge and knowing that the quarterback’s going to step up and complete a pass, if you don’t hurry up and do a pass rush move or get your hands in the passing lane, that’s something that’s pretty good [about] having him around,” Burch said. “He’s changed a lot. You’ve got to take a different approach when going against him and the offensive line.”

Here is Burch’s story in his own words:

Considering that Rattler has given Burch and the South Carolina defense fits in practice, one would assume that the athleticism would translate to the field for the Gamecocks and their new quarterback in 2022. Only time will tell.