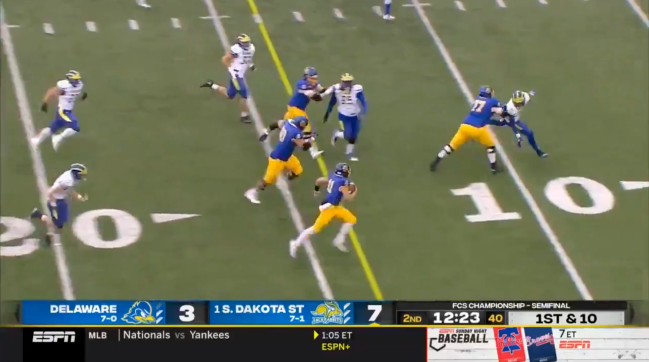 Spring football has been such a treat. Sure, it’s not Alabama and LSU in primetime from Death Valley, but that hasn’t kept us from getting our fair share of fun— like this trick play touchdown from South Dakota State.

The Jackrabbits have taken the throne from their northernly neighbors as the top team in FCS football and they absolutely demolished undefeated Delaware in their Semifinal matchup on Saturday. After jumping out to a 7-3 lead at the end of the first quarter, offensive coordinator Jason Eck dialed up a thing of beauty.

On first-and-10 from their opponents’ 24-yard-line, quarterback Mark Gronowski took the snap out of the gun and threw a quick-trigger backward pass to running back Pierre Strong Jr. on the far sideline. As the Blue Hens defense crashed on the team’s speedy ballcarrier, Strong passed the ball back to Gronowski, who had slipped out to the edge and caught the ball. He made a defender miss with a nifty cutback and went untouched inside the five-yard-line before powering his way into the end zone.

QB Mark Gronowski just caught a TD. You read that right! What a call! 👀pic.twitter.com/MokFrqL4dn

Everything about the call is a thing of beauty, but watch the offensive line in particular. The big uglies shuffle left for a moment, disguising the play as a screen, before pausing, waiting for the double pass to be thrown and hauling downfield in front of Gronowski. They all did their job and did it well, however, I’d like to point out both tackles in particular. This play does not happen without them.

Watch the left tackle initiate his block at the line of scrimmage on the near hashmark. He drives him (with momentum and flow of traffic) a good 15 yards. His counterpart, the right tackle is the anchor for the whole play. As the double pass comes back in his direction, he keeps the lane clear for Gronowski to catch the pass and make his first move. If he is not there, the trick play is a loss of four. Great stuff all around.