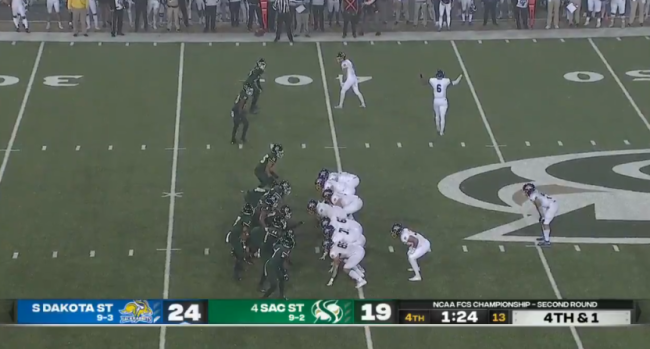 South Dakota State is set to play Villanova in the second round of the FCS football playoffs after knocking off No. 4 Sacramento State on Saturday. The Jackrabbits moved to 10-3 on the year with the win and iced game in savage fashion.

After falling behind 24-13, the Hornets scored with two minutes and 33 seconds left. However, a failed two-point conversion kept the game at a touchdown’s distance.

To win the game, Sac. State needed to recover the onside kick, drive 50-ish yards and score. A tie was not an option.

That did not happen. South Dakota State recovered the onside kick and ran the clock down to one minute and 24 seconds remaining.

On 4th-and-1, Jackrabbits head coach John Stiegelmeier had a decision to make. He could go for it and end the game, or punt and give his opponent a chance.

Stiegelmeier chose the former, but got creative in doing so. Quarterback Chris Oladokun was lined up under center, but quickly turned around and walked over to the sideline as if he was confused.

Instead of calling a timeout, like it appeared as though SDSU was going to, running back Isaiah Davis took the direct snap out of the backfield. He ran straight up the gut and climbed through the crowded line of scrimmage for two yards.

Seeing that it was 4th-and-1, Davis’ run gained the first down and, in turn, iced the game.

Stiegelmeier’s call is pretty unprecedented. Rarely, if ever, does a team run a trick play on 4th-and-1, at midfield, with the game on the line.

But the stone-cold call paid off and it was awesome.