With the college football season on the not-so-distant horizon, it is almost the time of year that one song gets significantly overplayed and drives you insane the entire fall. Last year, that song was Walker Hayes’ viral song ‘Fancy Like.’

You know, the Applebee’s one that made you want to throw your TV across the room?

Well, we almost had a similar situation on our hands but vicious cyberbullying proved to be successful on Friday. It resulted in a brutal ratio that sent a very clear message amongst fans of the best, most totally normal sport in the world.

Hayes, who was behind the headache-inducing tune last season, dropped another earbleeder on Friday afternoon. The song, titled ‘Y’all Life,’ is very annoying. Some credit to Hayes though, the man is getting that bag and doesn’t seem to care how he gets it.

(I almost would prefer that you do not click the video below so that it does not register the click, but do what you must… just trust that it’s terrible.)

Shortly after the song and music video dropped, the Southeastern Conference made a very ill-advised tweet. Whomever on the social team that was behind the post didn’t know that it was not a good idea when he or she posted it, but he or she found out quickly. 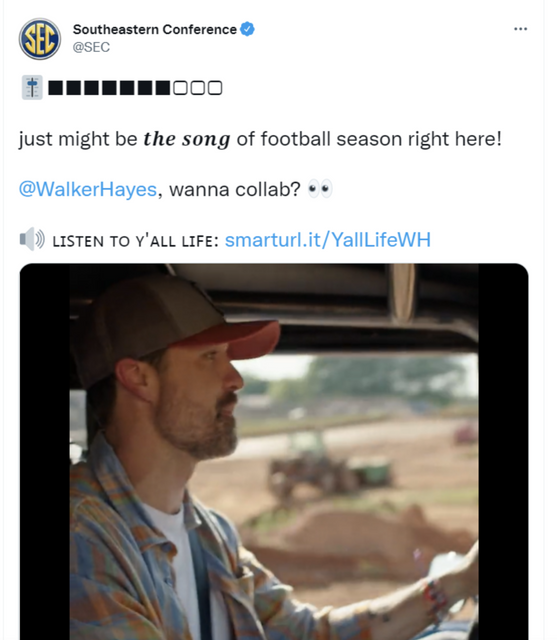 The reception amongst football fans — particularly those from the Southeast — was loud and resoundingly against any sort of situation in which the new Hayes sound would be part of the college football gameday experience in any way, shape or form.

People were ruthless and the SEC got ratioed, badly.

This, and I mean this with as much disrespect as possible, is the worst song ever made.

Jesus isn’t coming back until we stop embarrassing him like this https://t.co/w2CTDzWpXi

Don’t make me go back there… pic.twitter.com/BpAu7BZgF8

You just made country, hip hop, and church all worse with one clip

If I were an SEC school I’d switch to CUSA if THIS is the song of college football.

One person suggested that the SEC should delete its tweet.

Delete this right now and never speak of it again.

After hours and hours of constant, relentless cyberbullying, the Southeastern Conference listened. They deleted the tweet, even after Hayes expressed his excitement about a potential partnership.

Hopefully the message was received. Hopefully we do not have to hear this song even one time this fall. Well done football fans, well done internet. We won.